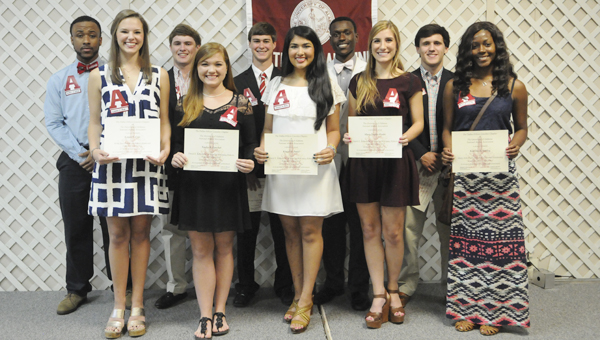 Eleven local high school seniors were greeted by a room full of “Roll Tide’s” and a scholarship from the Dallas-Wilcox Bama Club Thursday night at the Church Street United Methodist Church.

The seniors were each awarded a $2,000 scholarship from the Dallas-Wilcox Bama Club, which exists primarily to provide financial assistance to students from Dallas and Wilcox County that are set to attend the University of Alabama.

“I’d like to greet these students with something they will be hearing a lot and that’s ‘Roll Tide,’” Dallas-Wilcox Bama Club scholarship chairman James McNeil said. “This is a great looking group of kids. In going over their academic achievements I think they all did extremely well.”

“You’re hard work over your work in high school has paid a nice reward and you are about to enter one of the most exciting periods in your lives,” Witt said to the scholarship recipients.

Witt said Alabama’s academic environment has allowed the university to attract some of the nation’s “best and the brightest” students — his theme for the night.

“We believe the eleven students we have given scholarships to are part of the best and brightest,” McNeil said.

Witt said Alabama’s focus on academics and the environment the university has created based around academics, makes it hard for a student to lose his or her way.

“One of the most special things about the University of Alabama is you cannot get lost there,” Witt said. “You will remain an individual. You will not just become a number.”

Witt closed by taking questions on the changing landscape of collegiate athletics, unionization of athletes, the rising cost of a college education and how he sees the University of Alabama growing in the future.

Rain has caused headaches for the Alabama State Senior Golf Championship, but thanks to some maneuvering by the Alabama Golf... read more