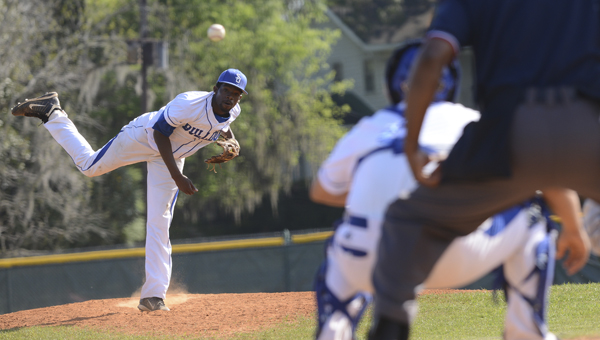 Selma University pitcher Tarus Hervey throws a pitch in a game earlier this season against Concordia College Alabama. Hervey and the Bulldogs lost two of their three contests in the Small College World Series and were eliminated Tuesday evening.–File Photo

Rain and heavy storms in Illinois have caused fits for organizers at the tournament, forcing games to be postponed and creating scheduling headaches. The Bulldogs (19-8) were one of the teams most affected by the weather, with one game forced to be postponed midway through the second inning and another had to be pushed back to the last game of the night.

Selma University head coach Adrian Holloway isn’t using the weather as an excuse, but he did say the storms caused issues for his team.

“It played a big factor in it because the rain came and right as we were getting momentum going the rain came and we had to stop,” Holloway said. “Then it got really cold yesterday. It was raining and it got cold during the day. We came from playing in 85 degree weather to last night it was like 40 degrees outside with rain.”

Selma University actually started out the World Series Monday with a win, beating starting pitcher Lewis Applegate and Robert Morris Springfield 5-2. Applegate led the USCAA in strikeouts this season, but could manage only four against the Bulldogs.

“When we got that victory, I was feeling really good. I was really confident about us going through this tournament,” Holloway said. “I really felt like we could win it. To be honest, I was really shocked how we came out and played after that. I thought we had the first one under our belt, the nerves and jitters were out.”

There were not a lot of positives after the win.

In their second game of the tournament Monday night, Selma trailed Lindenwood 2-1 in the second inning when rain forced the game to be postponed until Tuesday morning. The Bulldogs had to change pitchers, because starter David Lee started experiencing arm stiffness in the closing minutes of the game.

When the game resumed, Lindenwood took immediate control with a four-run third inning and ran away for a 10-4 victory.

“From playing experience, I know any time a game gets stopped like that and you have to resume it the next day, it is kind of tough to pick up that same intensity,” Holloway said.

After that defeat, the Bulldogs had to wait seven hours for their next contest against Penn State Greater Allegheny.

Selma lost 7-1 in a game where the Bulldogs actually outhit their opponents 8 to 5 but couldn’t manage enough runs to keep it close.

One bright spot for the Bulldogs was Mitchell Webb, who finished second in the league’s homerun derby on Sunday night.

Concordia lost its opening game to Penn State Mont Alto 9-0. The Hornets managed only one hit in the contest.

The second game didn’t go much better for the Hornets, who fell 11-0 to Carlow. Concordia managed only three hits in that game. The two losses ended the Hornets’ season.

Local athletes of the year fan vote to get underway Thursday

Dallas County is full of gifted male and female athletes that have shined in their respected sports this past year,... read more