Editor’s Note: This is the second in a series spotlighting each of the valedictorians from high schools within Dallas County.

For high school seniors, graduation comes with the promise of a diploma, but every year, one student’s hard work and dedication is rewarded with the honor of being named valedictorian. 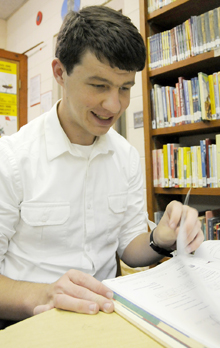 This year, Austin Deavers was given that distinguished title for Meadowview Christian School’s Class of 2014.

Renee Callen has only been headmaster for Meadowview for one year, but she said Deavers has not been tardy for class or missed a day of school in 12 years.

“Austin is the picture of excellence,” Callen said. “He strives for excellence in everything he does. He’s almost perfect. He’s so strong academically. He never takes a break. He wants to know everything that’s out there.”

Deavers, who Callen describes as driven and hardworking, takes each of his textbooks home every night.

This past year, Deavers has accomplished much more than the honor of being valedictorian. Deavers has tutored students, served as the Student Government Association’s vice president, played on the baseball and football team and was one of 25 students on the Alabama Independent School Association’s All-State Academic team.

It is not all work for Deavers, who spends his free time browsing the Internet, working on stories he has written or enjoying time outdoors.

“He’s our biggest cheerleader,” Callen said. “He’s such an encourager. I guess that’s the best thing he does. He just gets so enthusiastic about the ball games or any competition, whether it be on the playing field or in the classroom. He’s just an all-around great person.”

Deavers plans to attend University of Alabama-Huntsville this fall and major in either computer or aerospace engineering.

Deavers pushes the spotlight off himself, however, and shines a light on his mother, Brenda Deavers.

“Well, I would like to thank my mom for all the hard work she’s done for me and all she’s taught me,” he said.

Deavers will deliver a speech at Meadowview Christian School’s graduation May 23 at 7 p.m.