The Dart: Flournoy has a deep love for music 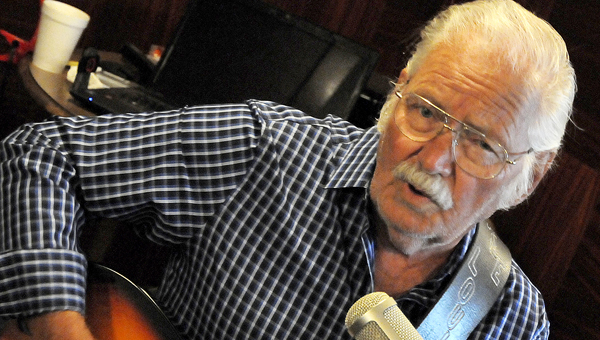 Lawley resident Louis Flournoy plays the guitar and sings an original song at the Craigfield Golf Course Wednesday. Flournoy, who owns 15 guitars, has had a passion for music since he was a young child. (Photo by Sarah Robinson | Times-Journal)

On any given Sunday morning, you can find Lawley resident Louis Flournoy, 75, at the Overlook Hills Church of God doing what he cherishes most — playing music.

Flournoy, who owns 15 guitars, has had a passion for music since he was a young child. As a guitarist and vocalist, Flournoy said he’s drawn to the power of music, an art he described as an international language that can evoke emotion from those who hear it.

“I don’t know where I would be today if it hadn’t been for music, because music has been my first love,” Flournoy said.

Musically inspired by outlaw country artists, Hank Williams Sr., Hank Williams Jr. and several others, Flournoy has traveled across the country performing in Arkansas, Nebraska, Alabama, Mississippi and other states. Whether he was playing with a group or alone, he often played outlaw country.

While he still enjoys the genre sometimes, he mostly plays gospel music. One of his favorite gospel songs is the hymn “Amazing Grace.”

Flournoy said he likes to play different versions of the song to appeal to different crowds.

While most people measure success in terms of money and power, Flournoy said success comes with dedicating your life to what you enjoy most. He suggested that young people should learn to earn a living doing something they truly love to do.

“I always worked a full-time job. I always had security,” Flournoy said. “If I had a life to live over, I would do nothing but music.”

As a father of seven, Flournoy’s love of music has unintentionally influenced one of his sons to dive into the music industry as a guitarist. He has joined a band and is traveling the country playing music, which reminds Flournoy of his old days.

Flournoy recently gave that same son his bass guitar, which he has used to perform all over the country. Flournoy’s son had requested he receive it after he died, but Flournoy wanted the pleasure of giving it to him while he was alive to see his reaction to the gift.

Flournoy said he couldn’t even begin to describe how it felt to pass it down.

“I have never found the words to describe the joy to pass on to your kids something that’s been a treasure and pleasure to you,” Flournoy said. “It’s an indescribable feeling.”