Election season proves to be a boost for local businesses 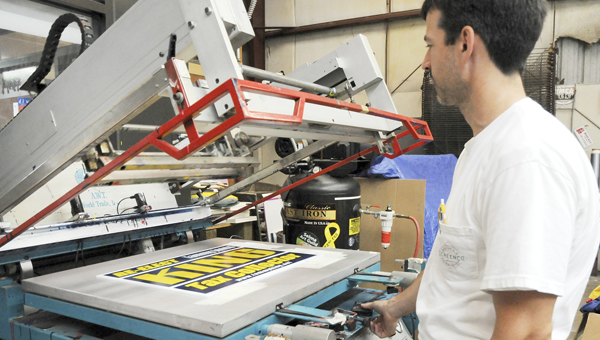 Jeffrey Nichols, with Screenco, during an election year, can see an average of 1,000 orders from different local political campaigns.

“We work with county commissioners to tax collector,” Nichols said. “Right now, [Sheriff Harris Huffman] is probably one of the bigger ones that we do.”

John Brian Hale, with Automotive Excitement, has seen the same bump in business with the elections.

Both businesses make extra preparations for an election season, getting ready for the expected rise in sales. While Screenco might add additional staff three to four months ahead of election, Automotive Excitement keeps it at two members; however, they do order extra supplies for that time.

“We usually order coroplast and yard stakes, cause it’s (yard signs) that are going to be the most popular thing,” Hale said.

But while the candidates have the option to go out of town for their printing needs, Screenco and Automotive Excitement have encouraged campaigns to stay local.

“We try to be very price competitive. Sometimes we can’t match what somebody does, but we try to give a fair price for a fair product,” Nichols said. “Some of those bigger companies, the volume is so much higher than ours that they can do it for less.”

Even though the companies regularly see a bump in business during election season, it’s not the type of business — or season — that makes or breaks their business.

“We have so many different things we are capable of doing. Just, like they say, we don’t put all our eggs in one basket,” Nichols said. “We try to diversify enough so we don’t have to rely on ‘hey, it’s political season.’ We don’t have to just do only political stuff.”

But the companies are thankful for the support they receive, especially local.

“I just really want to push to thank the local people who supported local businesses, because that’s where it really is,” Nichols said. “It could be so easy for them to order off the Internet and send all that money out.”

The Selma Times-Journal announced Monday the addition of reporters Scottie Brown and Christopher Edmunds. The two have joined the Times-Journal... read more