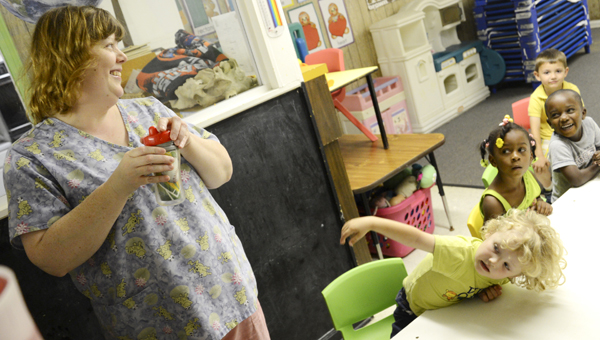 Shannon Duncan has been a pre-kindergarten teacher at Selma’s Little People Daycare for 15 years, and while some of the names and faces may drift into her memory over the years, one current student will be hard for her to forget.

Duncan’s 4-year-old son Kenny has the rare opportunity to joining his mom at work every day and the rarity of that is not lost on Shannon.

“I know most parents have to be away from their child during the day, but he gets to stay with me and that’s pretty special,” Shannon said. “It’s nice to be here with him because I get to watch him grow and learn and mature. He’s learned so much and he’s talking a whole lot more than he used to when he first came here.”

Students at Little People spent the week making paper different arts and crafts to give to their mothers on Mother’s Day, and some took time Thursday to talk about why they love their mothers.

Lucas Zahrednik was far from the only one in his class who said he enjoys spending time with his mother, but he said he specifically enjoy when she joins him for a quick bike ride.

Lela Moore and Jada Sparks both said they enjoy playing with their mother’s. Jada said she and her mom go to the playground often, and Lela said her favorite thing to do is to make necklaces with her mom. Sophie Goodman she loves when her mom laughs so hard she falls on the ground.

“I like to peace at home with my mom, and I really like her pizza,” Jakobi Freeman said. “She’ll put hamburger and candy on the pizza.”

Others boasted about the interesting pizza toppings their mothers are known to use.

“We make pizza sometimes, and she puts French fries on pizza,” Shekina Andrew said. “And she makes chicken nuggets for me, too.”

For Lucas Bradley, nothing beats a little drive with his mom, especially when she cranks up the radio and sings along.

“She always let’s me go places. Momma will take me anywhere I want,” said Lucas Bradley. “She has a beautiful voice and I like when she sings for me.”

Faith and Family: Women talk about being foster moms