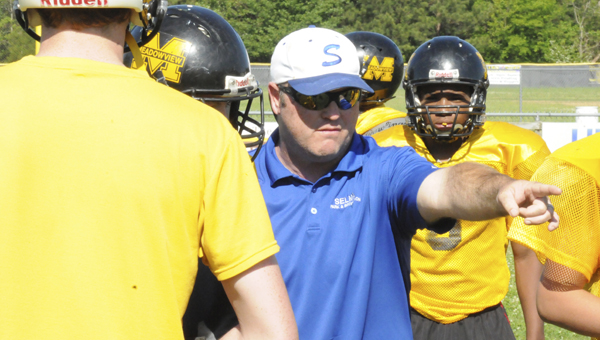 Meadowview Christian started spring training this week and at first glance, the Trojans practices looked like any other.  Players donned their familiar black and yellow uniforms and went through drills, focused on learning the fundamentals of football and working towards a jamboree game later this spring.

However, this week marked a new beginning in Trojans football. Meadowview moved its sports programs to the Alabama Christian Education Association earlier this spring and will now play eight-man football, which in turn figures to eliminate the depth issues that have plagued the Trojans the last few seasons.

“Participation has been pretty good,” Meadowview Christian head coach Lebo Jones said. “We have had a couple of guys out sick or with a death in the family but we have 17 or 18 out here most every day. A lot of guys have never played before so it is a getting back to the basics things right now.”

Jones said the difference in eight-man and eleven-man football is minimal, so there haven’t been any major tweaks needed at practice.

“There’s really not that much difference,” Jones said. “All the rules are the same, you just take your two tackles out and a back out of the backfield and you can basically run all the same plays you ran before.”

The other differences — which include a playing field that isn’t as wide as a normal football field — do not affect the way the game is played.

With some depth for the first time in years, the Trojans are hoping to have enough players to have two strings on offense and defense.

The last few seasons, Meadowview has struggled to have enough players in order to scrimmage in practices, which is one of the reasons that led to the swap to eight-man football.

The change has made it possible for the Trojans to hold full scrimmages, allowing the players to get the look and feel of an actual football game. Meadowview plans to scrimmage a lot in the next few weeks as they prepare for their spring jamboree game at Capital Heights Junior High School in Montgomery.

One of the focuses in scrimmages will be running the option on offense. Jones said with the speed the Trojans have in the backfield, he thinks the option can be a big part of what Meadowview does offesively this season.

“We ran it a little bit last year but the year before we ran it a good bit,” Jones said. “We are trying to go back to it because we have a lot of speed this year in the backfield, so I’d like to try to get outside as much as we can. We’re going to try it and see if it works.”

Last season, the Trojans finished the season 1-9 in the Alabama Independent School Association. In the ACEA, which is governed by the Christian Football Association, Meadowview will play in a seven-team division and hopes to be more competitive.