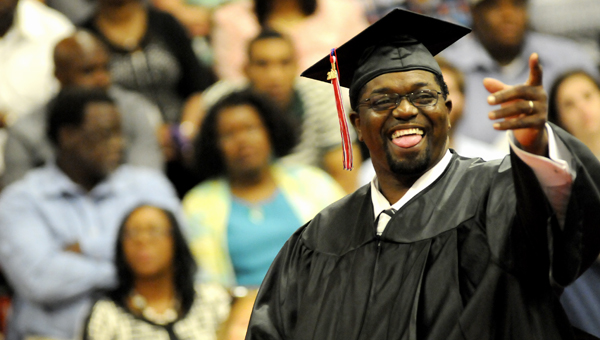 Hundreds of students marked the next chapter in their lives Friday with graduation ceremonies at two local colleges.

Selma University President Dr. Alvin Cleveland Sr. said he’s proud to see students at his university walk across the stage after years of dedicating their time and effort to completing their education at the university.

“I feel good, because they worked hard,” Cleveland said. “It always a good feeling to see people finish his or her work and move on to something else.”

Mitchell encouraged the students to apply the diligent attitude they used to earn their degree to their efforts to become successful after gradation.

After the ceremony, Mitchell rushed across town to celebrate Wallace’s graduation. A total of 518 students received a degree or certificate as a part of the 2014 class and 200 students participated in the ceremony.

State Rep. Darrio Melton followed Lee as the commencement speaker. Melton offered words of encouragement and told graduates to leave their mark on the world.

“What matters is what’s inside of you,” Melton said. “Only you can define who you are. Many will strive to be survivors, just enough to get by, and many will strive to be successful. I challenge the next generation and the graduates tonight not to just survive, not just to be successful, but to be significant because when you are significant you impact other people’s lives.”

With some help from a member of the state intervention, Selma City Schools has received a $20,000 grant for its... read more