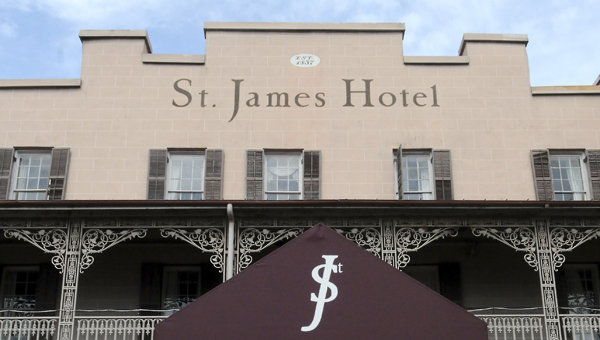 The contact between the City of Selma and Strand Management, the company selected by the city to run the iconic St. James Hotel, is closer to being approved following Thursday’s Selma City Council work session.

The Selma City Council moved one step closer Thursday to finalizing a contract with Strand Management to operate the city-owned St. James Hotel.

The council received an updated hotel management agreement during its work session. The agreement made changes to several areas. It merges the two contracts presented to the council in April.

After receiving the contract, council members said they would take time to review details before commenting. Though, Ward 3 Greg Bjelke said he was excited to move forward with finalizing the agreement.

“I’m ready to go ahead and get it done,” Bjelke said. “I think everyone is ready to move forward.”

As a part of the contract, the city will pay Strand Management, based in North Carolina, $4,000 per month or 3 percent of gross revenues, whichever is greater.

Strand will also be required to operate a restaurant and bar, according to the contract. Strand officials previously said operating a bar and restaurant may not be profitable.

The agreement lists May 1 as the start date for management, with an option to renew for two, subsequent one-year terms.

If management is terminated, the agreement also includes a clause requiring Strand to return the St James to its condition when received. When the previous management company — Gourmet Services LLC — left the St. James in July 2013, city officials complained of poor conditions and missing equipment.

Executive assistant Sonya Mills-McCall said the updated contract would be presented for its first reading during Tuesday’s city council meeting.

In other news from Thursday’s work session:

• City attorney Jimmy Nunn presented a resolution that would donate all pieces of property containing city schools to the Selma City School Board.

“The school board already had the schools listed on their list of assets for auditing purposes,” Nunn said. “But then they found out they didn’t actually own the property.”

Some of the schools included are: Sophia P. Kingston Elementary, Payne Elementary, The School of Discovery and Byrd Elementary.

The donation will not include parks located adjacent to some of the schools, Nunn said.

Patricia Robinson holds a photograph that includes her son, Andre Robinson. Andre was shot and killed during a robbery on... read more