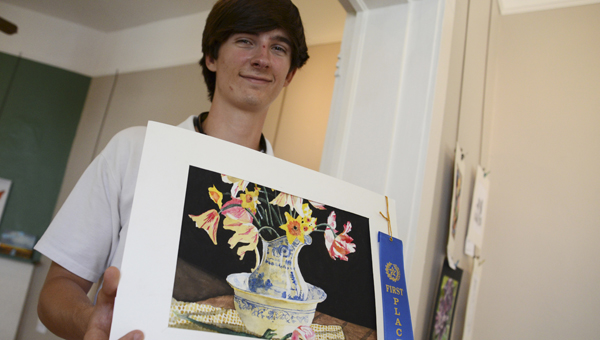 Morgan Academy senior Matt Rester has never considered himself much of an artist, but after the creative explosion he’s had over the past school year, there are many who would beg to disagree.

Rester recently won first place in the high school category at the Selma Art Guild’s Student Art Show for a watercolor painting of a flower vase that has proven to himself, his teachers and even his mother he is a talented artist.

“Some people, even in kindergarten, you can tell they’ve got the so much talent, and some others it slowly comes,” said Morgan Academy art teacher Cam Guarino. “Matt’s very quiet, and it’s just like this year he just bloomed.”

For Matt, his favorite thing about the paintings he has created in Guarino’s classes this year has been the realism he’s been able to capture on paper.

“It’s been fun kind of getting lost in painting,” Matt said. “Because I want to pay attention to every detail so you can make it as realistic as possible. It’s even more fun now because I found out I’m pretty good at it.”

Guarino, who has taught art at Morgan for 14 years, said Matt’s attention to detail has served him well in her class.

“His pieces have such a realistic appearance, and it is something he has really worked at,” Guarino said.

Matt’s painting of the vase and a vibrant bouquet of flowers has earned him awards at Morgan as well as at district and state art competitions, but he said to wasn’t easy to create.

“It took me about two-and-a-half weeks in class to finish this painting, and it was worth it,” Matt said. “I kind of knew it would look pretty good, but I wasn’t sure I would get the colors right.”

Along with the accolades and awards the vase painting has garnered, Matt has enjoyed some praise from his mother Linda, who only recently learned of the talents he put to good use in the classroom.

“I must have looked at this painting a hundred times and I told Cam I couldn’t believe he painted this. It’s awesome,” Linda said. “I know several people have asked him about buying some of his pieces, but I’ve told him not to sell any of them. I just can’t believe I didn’t realize he was this talented.”

“I was thinking about doing some more and maybe selling them,” Matt said. “I’ve just bought some watercolors, and that’s my favorite medium right now because it seems like the colors just flow a lot easier in water color.”