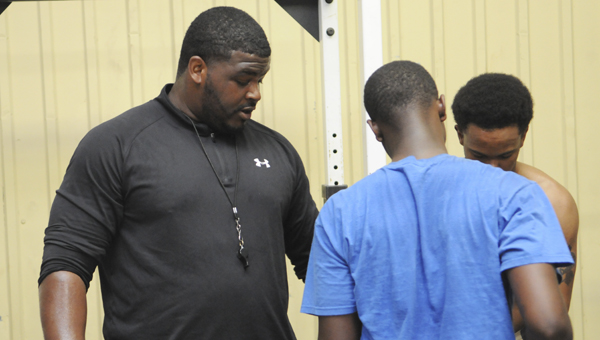 Ellwood Christian football coach Eric Martinear, left, talks to his players during a weight lifting session Wednesday afternoon. Martinear was hired as the Eagles new football coach after a month-long search. He played college football at Lane College and played in the IFL with the New Mexico Stars.–Daniel Evans

After a month-long search, Ellwood Christian Academy has a new football coach.

Eric Martinear, who was the offensive line and strength and conditioning coach at Concordia College Alabama last season, has been hired to take over the Eagles football program.

Crum said the Eagles interviewed five candidates for the head coaching position, with Martinear’s youth and his knowledge of the area separating him from the other candidates. Former head football coach Mike Stokes will serve as the school’s assistant athletic director.

“[He] will continue to play a tremendous role in our athletic program,” Crum said of Mike Stokes.

Martinear started at offensive tackle for four years at Lane College in Jackson, Tenn., and then coached on Selma High School’s staff in 2012. He then spent one season at CCA.

“I think it prepared me for now,” Martinear said of his various coaching stops. “Getting an opportunity to coach at Lane once I got finished with school, coaching at Selma High a year and being at Concordia last year — being a full time assistant offensive line coach, writing up scouting reports and breaking down game films and things like that — prepared me to be a head coach.”

“I made a bad decision,” Martinear said. “A lot of things happened that night. If I could take it back, I’d take it back and make a better choice. It was just a learning experience. It taught me that I’m not bigger than anything.”

In 2009, Martinear tore his labrum and required surgery. He signed an agent in hopes of playing in the NFL but went undrafted and turned his attention to coaching football.