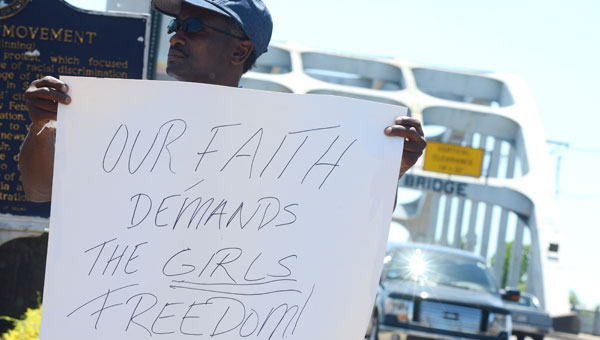 Allen Garner holds a sign Tuesday afternoon during a rally for the 200 Nigerian girls kidnapped from their school in mid-April. (Jay Sowers | Times-Journal)

Two dozen members of the Selma community gathered Tuesday to show support for the victims of a mass kidnapping that occurred last month on the other side of the world.

Three weeks after more than 200 girls were kidnapped from their school in rural Nigeria by members of an Islamist militant group, event organizer Rose Sanders and others came together in Songs of Selma Park to raise awareness about the kidnappings that until recently have been largely ignored by members of the western media.

“We are here today in solidarity with the young women who were kidnapped in Nigeria,” Sanders said. “We just want to show solidarity with the people all over the world who are asking why this isn’t being covered. These children have been missing for three weeks and we are just beginning to focus on their lives.”

Minister Malika Fortier of the Beloved Community Church of Selma addressed the crowd Tuesday and said a global perception of women as less important than men could be one reason the mass kidnapping hasn’t captured the attention of many in the global community.

“This is a challenge and an issue that did not just start with this kidnapping. There is a devaluing of girls and women,” Fortier said. “And it is so important that we remember the value of God’s little princesses, and that we treat each girl and each woman like the princess they are.”

Selma resident Rajeeyah Holmes said this is a topic everyone should care about.

“We all have mothers, most of us have sisters and a lot of us have daughters and nieces,” Holmes said. “It’s important not only to remember this young group of young ladies, but that it is a systemic problem across the world with women and girls being kidnapped and sold into slavery”

As a Muslim, Holmes said she also wanted to remind people that the Boko Haram — the group that has claimed responsibility for the kidnappings — does not represent the beliefs of the vast majority of Muslim people.

“I wanted to come and say that most Muslims are not extremists. There are only a certain small number that are like this,” Holmes said. “That is not a part of our religion. We are definitely pro-women and pro-human rights. What they have done is atrocious.”

For Fortier, comments by Boko Haram leaders that they committed the crimes because of their Islamic faith — and this week, that they are considering selling the girls into slavery — are unfathomable.

“They are saying they are doing this out of religious commitment and because of God,” Fortier said. “I cannot imagine how God must feel to have this happen in his name.”

Sanders said a second vigil is planned to take place at noon on Tuesday, May 13.

The Tuesday evening shooting of a 12-year-old boy has landed two Selma teenagers — one, the victim’s older brother —... read more