The Tuesday evening shooting of a 12-year-old boy has landed two Selma teenagers — one, the victim’s older brother — behind bars. 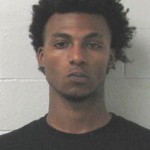 In a news release, Selma police investigator Curtis Muhannad said 19-year-old Antonio Latrey Green-Howell, the victim’s brother, is facing one count of delivery of a firearm to a minor and one count of contributing to the delinquency of a minor. Green-Howell has a total bond of $16,000.

A 15-year-old juvenile, believed to be the shooter in Tuesday’s incident, is being held at the Juvenile Detention Center on one count of assault 2nd degree and is awaiting a juvenile detention hearing.

Muhannad said officers from the Selma Police Department responded to a call from the emergency room at Vaughan Regional Medical Center at 6:30 p.m. regarding a 12-year-old boy suffering from a gunshot wound to his abdomen.

When detectives arrived at Vaughan, they were able to interview the victim’s aunt and older brother before speaking with the victim, who said a juvenile named Trey had shot him. The victim also told investigators the shooting occurred in the 1900 block of Marie Foster Street.

During a crime scene investigation, detectives were able to identify the 15-year-old shooter and make the arrest.

In the release, Muhannad said the shooter told detectives he had received the weapon — a semi-automatic .25 caliber handgun — from Green-Howell, the older brother of the victim, who detectives had spoken with at the emergency room.

The shooter told police where he hid the gun under Green-Howell’s instruction.

Detectives went to the home of Green-Howell, where he was questioned about his brother’s shooting  and how the 15-year-old came to possess the weapon.

Following the interview, Green-Howell was charged with delivery of a firearm to a minor, which carries a $15,000 bond, and contributing to the delinquency of a minor, which comes with a $1,000 bond.

Green-Howell is being held at the Dallas County Jail.

Patricia Robinson holds a photograph that includes her son, Andre Robinson. Andre was shot and killed during a robbery on... read more