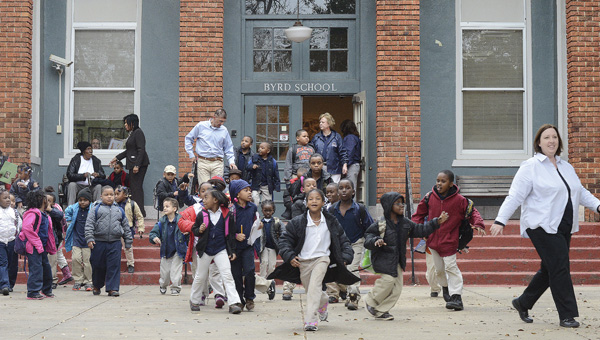 Students pour out of Byrd Elementary at the end of the school day earlier this year. The Selma City School Board discussed a plan Tuesday that would convert the elementary school to a Pre-K school beginning next school year. — File Photo

By the fall, Byrd Elementary could be home to more than 300 pre-school students.

Larry DiChiara, acting superintendent of education for Selma City Schools, proposed turning Byrd into an early learning center during Tuesday’s work session for the Selma City School Board. The converted Byrd Elementary would only teach pre-school students. DiChiara said the conversion is part of an effort to keep Byrd open.

“The school is down to 100 students now and losing students fairly quickly,” he said. “It is kind of drying up and if it keeps going the school isn’t going to have any students. We don’t want that to happen.”

He said the Selma City School System currently spends an excessively large amount — $1.4 million — in Title I Funds on pre-school education. In total, the system receives $2.8 million in Title I Funds, which means pre-school programs receive about 50 percent of the money.

“It is a very unusual thing that we are doing here,” DiChiara said. “The State of Alabama does not expect you to spend to spend more than 15 percent of your title funds. That means the students that earn that money — K through 12 — are only getting 50 percent of what they earn.”

Title I Funds are provided to districts based on the number of children from low-income families.

DiChiara said savings would come partially through a partnership with the local Head Start Program, which has several locations in Dallas County. The conversion could mean Head Start and the Selma City School System sharing the cost of teacher pay.

“If there are other pockets of money out there that will pay for those pre-k students, like Head Start, then let’s let them pay for it,” he said. “We could use that money for a lot of things.”

Counting the school’s current pre-school programs, DiChiara said he expects about 360 students to initially enroll in Byrd as a part of the conversion, with more potentially coming from other, current Head Start Programs.

Another benefit of the Byrd conversion would be ensuring a high quality of education for students in pre-school programs, according to the proposal.

“They are teaching how to read in churches and around the county in Head Start Programs,” DiChiara said. “When we get them, we don’t know if they can read or not.”

During the meeting, school board member Dr. Kirit Chapatwalla expressed concerns about the effect of the consolidation.

“Some of the students who attend the Head Start Programs that don’t live in the city wouldn’t be able to transfer to the city programs,” Chapatwalla said.

Board member Brenda Randolph-Obamanu asked about qualifications of the current Head Start teachers.

“A lot of people who work in Head Start are not certified,” Obamanu said. “We would be taking all of our pre-k programs and putting them over [at Byrd], but we wouldn’t be putting them [at Byrd] with certified teachers.”

DiChiara responded saying the partnership could include the Selma City System helping to train teachers. The combination of Head Start and the system sharing teacher pay could also lead to higher quality teachers, he said.

DiChiara’s goal for the conversion is the beginning of the 2014-2015 school year, depending on logistical issues. If the school system would be required to make million dollar safety renovations as a part of the conversion, DiChiara said the system may not be able to afford the proposal.

The switch wouldn’t be the first time massive changes have been proposed at Byrd. In 2011, the superintendent of education Dr. Donald Jefferson proposed a plan to close Byrd Elementary, moving students to Knox Elementary. The proposal drew significant opposition from parents and the community and was ultimately voted down by the former members of the Selma City School Board.