A Stanton woman is behind bars after kidnapping her estranged husband, removing him from the Selma house of his girlfriend at gunpoint Saturday morning. 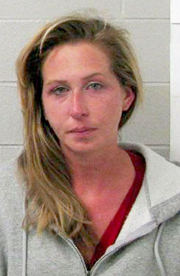 At around 5 a.m. Saturday, officers with the Selma Police Department responded to the 1900 block of Church Street in reference to a kidnapping. Once there, the were met by the victim’s girlfriend, who reported Bradley came to the home and fired gunshots in the air, demanding her husband come outside.

Muhannad said Bradley reportedly then started knocking on the door, yelling for her husband come outside and threatened to “shoot up” the house if he didn’t.

When the victim reportedly walked outside, Bradley then allegedly pointed the gun at threatened to kill him if he did not get in the car.

“Mrs. Bradley called the victim’s mother and told her that she was going to kill her son and drop his body somewhere between Selma and Maplesville,” Muhannad said.

He said the victim’s girlfriend followed Bradley after she left the house and provided locations of the car to E911 as they traveled north on Alabama Highway 22.

Officers with the Selma Police Department and Dallas County Sheriff’s Deputies made contact with the vehicle in Valley Grande, near the Dave’s Market Shopping Center, where they stopped the car.

Muhannad said officers were able to take Bradley in to custody and that the victim was unharmed. Inside the vehicle, officers found a .22 caliber semi-automatic handgun.

Muhannad added that while the couple is still legally married, they are “voluntarily separated.”

The name of the husband and the girlfriend were withheld by the Selma Police Department.

Carolyn Bates, founder and director of the Selma Disabilities Advocacy Program, center, leads the ceremony marking the groundbreaking of a... read more