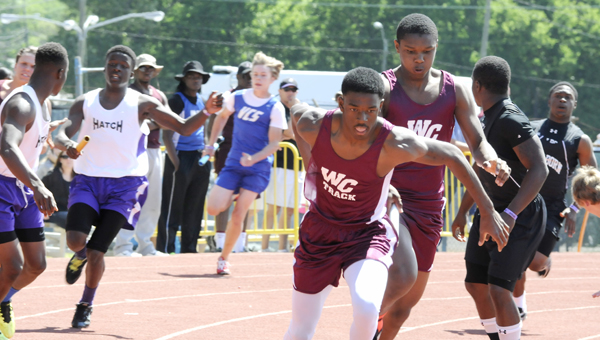 Washington County runner Keyshawn Abston takes the baton from a teammate during the boys 4×100 relay Friday at Memorial Stadium. The event was just one of many held during the first day of action at the Class 1A-3A state track championships. — Josh Bergeron | Times Journal

Among the large crowd were friends and family members eager to watch their loved ones compete in one of Selma’s biggest attractions.

Whether family members were supporting their relatives during their first state track meet or returning to the stadium to cheer their loved ones on, they said it was fun for them to be there to show their support.

Buhl residents Michetta Armstead and Steve Armstead, the parents of a Simpsey Valley High School competitor, are no strangers to high school track meet events, having attended several of their daughter’s meets in the past. They understand the positive influence of being present while their daughter attempts to reach her dream to become a track star.

“It’s important for us to come out, because that’s what she wants us to do when she gets out of school,” Michetta Armstead said.

While several who are attending the two-day state state track event are sports fanatics, Shelicia Robbins’s only motivation to attend was to watch her nephew compete in the 200-meter and high jump. Knowing how much joy it brings him, makes the trip to the state track meet worth it.

“I wouldn’t be out here if it wasn’t for him,” Robbins said.

City of Selma officials were expecting between 3,000 and 5,000 visitors attending the meet. This marked the third consecutive years Selma has hosted this state meet.

(Jay Sowers | Times-Journal) The person in charge of the state’s intervention of the Selma City Schools made public Wednesday... read more