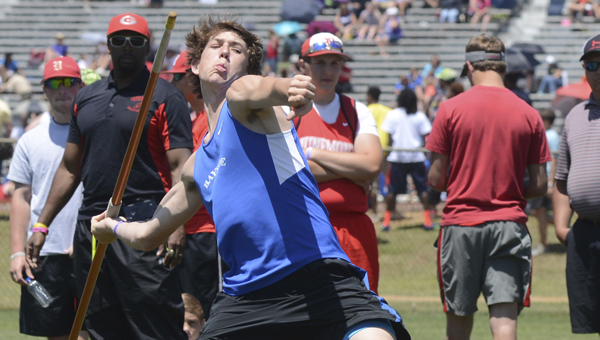 Thousands of fans and athletes converged on Selma’s Memorial Stadium for the first day of the Alabama High School Athletic Association’s Class 1A-3A state track meet and the competitors did not disappoint.

Six state records were broken in Friday’s competitions, which included numerous finals. Most of Friday’s schedule was made up of preliminary races, which set the field for championship races Saturday.

Among the local schools competing, Keith High School made the biggest splash. Anfernee Simmons jumped 6-foot-6 in the Class 1A men’s’ high jump — far surpassing his personal best of 6-foot-2 — to finish third.

“Adding a whole, pretty much half-foot on to his vertical is amazing,” Keith head coach Clifton Reeves said. “To go from, 6-foot to 6-foot-2 in pretty much a week, that’s unheard of.”

Simmons, who ended up settling for the bronze medal behind Falkville’s Bram Miller and Linden’s Kynard Craig, said watching the other competitors raise their game made him want to match their level.

“The hype from the crowd [helped],” Simmons said. “When I saw them do it, it just made me want to get even higher. “

Simmons did just that, soaring to 6-foot-6, before failing to leap over 6-foot-8, which would have shattered the previous state record. Miller ended up at 6-foot-6 as well, but won a tiebreaker with Simmons and Craig to win the title.

Keith’s men’s team also finished second in the 100-meter relay preliminaries and will race for the gold Saturday.

“Just looking at that performance we have a great chance to come in the top three in that,” Reeves said of the 100-meter relay. “That give them added motivation and they are really looking forward to tomorrow.”

The Bears sit 13th in the Class 1A men’s standings, well behind first place Falkville’s 68 points. Keith can add to its total Saturday in two events, when the men’s’ 4×100 team races for gold and Jeremiah Campbell takes part in the 100-meter dash.

Southside High School was the only other Dallas County school to participate in Friday’s meet, with the Panthers finishing 13th in the women’s 4×100 relay.

Schools from all over the state are calling Selma home this weekend, but many of them have already made a couple of trips to Selma’s Memorial Stadium.

One of those schools is Linden High School, which has been a major player in all three state championship meets in Selma.

The Patriots, led by head coach Andro Williams, are a lot younger this year, but are once again in the mix in the men’s standings. Linden sits fourth in the men’s’ standings after Friday.

“Our kids work hard and you get results when you work hard,” Williams said. “The ones that work hard are reaping the benefits out here and competing.”

Another school that has been a mainstay is Bayside Academy, which continues to chase a state championship in Class 3A.  The Admirals sit second in the Class 3A women’s standings after day one and are in position to compete for a state crown.

“My kids blew me away… We came out and got in the lead early with the long jump and high jump,” Bayside head coach Alan Foster said.

Saturday’s races will get underway at 8 a.m., with the championship ceremony expected to begin at 4:30 p.m. A total of 36 events will be run on Saturday, meaning there are a lot of points available for teams chasing state titles.

DCHS with work to do to win state title

Dallas County High School is in 16th place in the men’s standings after day one at the AHSAA 4A-6A state... read more