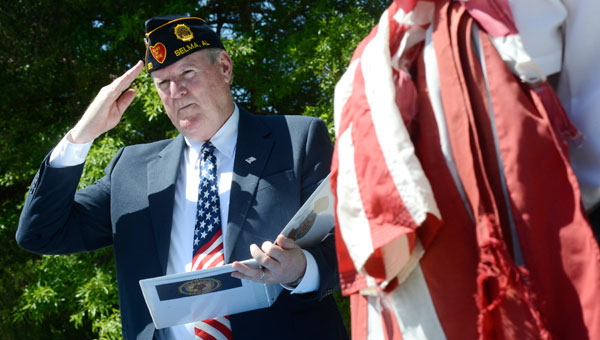 Saturday was a special day at Selma’s American Legion Post 20 as members gathered for the dignified disposal of 13 unserviceable American flags.

This is the second year in a row the Thomas R. Mackin Post has hosted the ceremonial flag burning.

Legion Service Officer James Edwards was charged with carrying the 13 flags during Saturday’s ceremony from where they had been laid earlier in the day to the fire where they would turn to ashes.

For Edwards, who served in the United States Army from 1968 to 1990, Saturday’s service was one more chance to honor the flag under which he served for so much of his life.

“To me it’s an honor because we are disposing of the American flag the way it should be done,” Edwards said. “I’m just proud to do be a part of it today.”

Edwards spoke briefly about his time in the Army’s honor guard, saying that time made him understand the importance of the proper disposal of American flags.

“I served on then honor guard for four years while I was in the Army,” Edwards said. “I’ve done a lot of graveside services. When I came back from Vietnam, we were doing one to two funerals a week, and that was hard. It broke my heart but we gave them everything we could.”

Legion Post Commander Bob McMasters said the ceremonial burning is only way to destroy an unusable American flag with dignity.

“We started this last year and we want to it be an annual thing from now one. I think it’s important for people to know and understand how to properly dispose of a worn American flag,” McMasters said. “Everybody buys a flag and they fly it in front of their house or business, and when its service is done we just don’t throw it away. Please, turn it over to us or the VFW to be disposed of properly.”

Just days after its amazing successful Chips for Charity event, the Selma Charity League came together to mark the year... read more