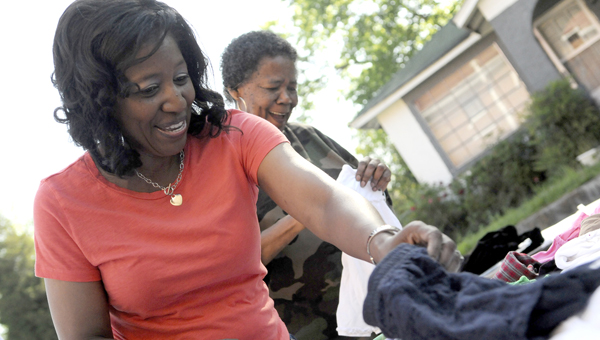 Selma residents walked up to the racks of clothing, took what they pleased and went on their way. Standing behind piles of shirts and shoes, church members smiled and waved as the church’s visitors departed. There was no need for alarm. Rather, the racks and tables of clothing were a part of West Trinity’s first ever clothes giveaway.

Event organizer Melvina Moss said the giveaway provided less fortunate Selma residents with an opportunity to fill his or her basic needs.

“We know that many in our community are hurting,” Moss said. “Someone may not have the money to get the clothes that they need. We want to help our community in any way we can.”

“Some of the children in Selma may not have quite as much money as others and are not able to have all of the nice things that other children have,” Smith said. “We hope this can be a way for children to get the things they need without having to spend money.”

Clothes were provided by church members and the general community, according to pastor Woodrow Johnson Jr. He said the giveaway is a part of the church’s ongoing goal to expand its missionary operations.

“Since I’ve been here, we have been gradually discussing expanding our ministry outside of the basic functions inside of the church,” Johnson said. “It’s not about what we can get from the people, but it’s about giving.”

Johnson referenced biblical text when referring to reasoning for holding the giveaway and expanding the church’s ministry into a missionary role.

“When I was hungry you fed me, when I was thirty you gave me water,” Johnson quoted. “That concept is about just being there for the people, regardless.”

If the church was left with any clothes following the giveaway, Johnson said the church would find a different way to provide them for free.

Other, upcoming missionary projects for the church include hosting a women’s conference, health fair and hosting a cancer awareness event. The church also plans to continue its clothes giveaway on an annual basis.

Johnson camp yet another success