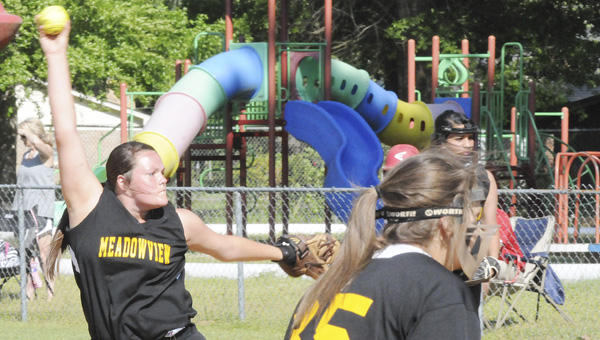 Meadowview Christian’s Claudia Kendrick, left, throws a pitch while Shelby Boswell, right, waits to react on a hit ball. Kendrick pitched all seven innings for the Trojans in their 5-3 defeat Friday to Sumter Academy. –Daniel Evans

The Lady Trojans seemed destined to put the Lady Eagles away — leading 3-1 after the first inning and clinging to the same lead through the next five innings, but Sumter found its offense just in time to stun Meadowview at home.

“We didn’t have hits. We didn’t string them together at the end and we’ve done that several times before.”

The game couldn’t have started any better for the Trojans at the plate.

After falling behind 1-0 early, Shelby Boswell’s single brought in Mallory Freine to tie the game. Boswell and Claudia Kendrick, who started at pitcher for the Trojans, each scored on passed balls and the Lady Trojans took a 3-1 lead.

The game turned into an offensive struggle for the next five innings.

Both teams missed out on chances to add runs.

In one instance, Sumter Academy had a player called for interference for making contact with Trojans third baseman, Boswell, which ended an inning that looked like it could have produced multiple runs.

The Trojans also stranded several runners on base and were unable to extend their lead.

Despite that, it looked like Meadowview was going to finish off the win because of Kendrick’s strong pitching perforamnce, but Sumter Academy found an answer just in time.

Sumter’s Mary-Marmon Patreno’s doubled to center field to tie the game 3-3. Brooklyn Bryan followed by grounding into a fielder’s choice that scored Karley McDaniel to give the Lady Eagles a 4-3 lead.

Kerri Giles added one more Sumter run on a single down the left field line to make the score 5-3 Eagles.

Meadowview was unable to answer, despite getting two runners on base early in the inning. Jessie Boswell and Kinley Varaman each singled to give the Trojans life, but Taylor Roberts struck out and Mallory Freine grounded out to end the contest.

Meadowview will play next Friday at Lagoon Park in Montgomery in the AISA Class A state tournament.