Everything in place as Battle of Selma begins 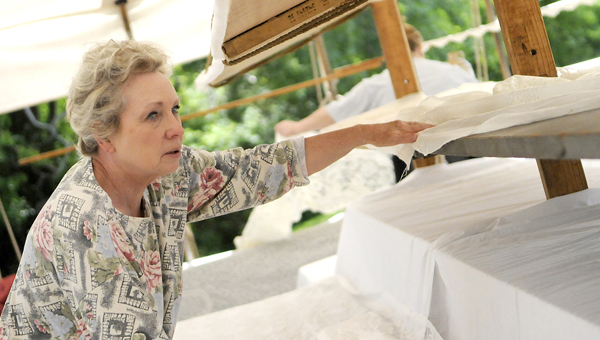 Sutler Alberta Millwood, from Jasper, sets up her tent on Wednesday in Riverside Park before Battle of Selma events begin Thursday. Millwood’s sutler tent is called The Lady in Black. She is one of 15 sutlers and merchants planned for the 2014 reenactment. — Josh Bergeron

Dozens of people converged on Riverside Park Wednesday to prepare for one of Selma’s largest outdoor productions.

Merchants, event organizers and reenactors began setting up tents and making final preparations for the 149th anniversary of the Battle of Selma. The first Battle of Selma events begin Thursday, with School Days, which welcomes thousands of students from across the state to witness what life was like during 1865.

Though the weekend battle reenactment is the most well-known of the events, event organizer James Hammonds likened the entire weekend of activities an outdoor cinematic production.

“As organizers we are basically responsible for the production and direction,” Hammonds said. “It’s basically a giant outdoor play that lasts three to four days.”

He said about 700 people, including merchants and reenactors, are scheduled to participate in the event.

Many of the participants come from Alabama, including Alberta Millwood, who runs a stand called The Lady in Black. Millwood is one of 12 sutlers —selling goods and clothing typical of the 1860s — scheduled to attend the battle in 2014.

After traveling between reenactments for more than 20 years, Millwood said she has developed a close relationship with many of her sutler counterparts.

“It’s really like a big family,” she said. “We see each other at all different reenactments throughout the year.”

Sutlers are just one of many Battle of Selma participants that have a close bond, according to John Kilpatrick. Kilpatrick will be a reenactor in the battle as a part of the 6th Alabama Calvary. The unit is composed of Alabama residents from across the state. The group’s passion for the Civil War is only bested by the close relationship developed over several years of Civil War reenactments.

“Our biggest gripe is that there isn’t another reenactment between December and February so we can see each other,” he said. “We certainly consider ourselves family.”

The 6th Alabama unit will be set up on the northwestern side of the battlefield, near Valley Creek.

Jack Thomason, who will be a surgeon during the reenactment, was one of the many setting up for the battle Wednesday. Thomason said his passion for reenactment stems partially from an interest in the Civil War, but also from time served in the military.

Thomason was a combat medic in Vietnam. Before retirement, he was also a college professor of nursing in Texas.

“It’s just a natural fit,” he said. “I love medicine and I love learning about the Civil War.”

Inside of a long wooden cabin, Thomason was setting up a medical treatment room, complete with a bloodied manikin. Thomas said he plans to use the manikin and other medical tools to show visitors what battlefield medicine looked like during the Cvil War.

For a full schedule of events, visit battleofselma.com