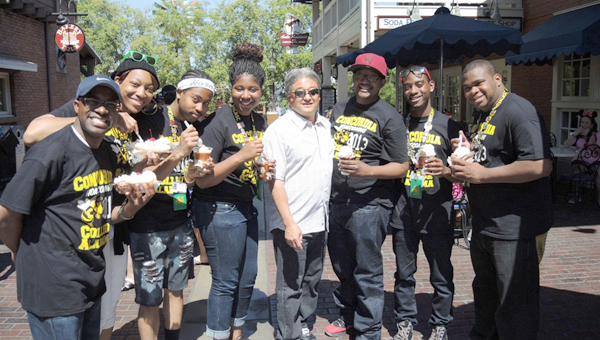 The group returned from the Honda Campus All-Star Challenge National Championship Tournament earlier this month as winners of the Facebook competition and recipients of a $4,000 grant.

“To go there, have this experience and be around all those great minds and then come back with a grant as well is just really phenomenal,” Dr. Chinwe Okeke, a Concordia biology professor and head adviser of the team, said. “The Honda Corporation is very generous when it comes to education.”

The Concordia College’s quiz bowl was one of 48 quiz bowl teams representing a Historical Black Colleges and Universities in the annual competition. They earned a spot in the “great 48” for their performance at the regional level where they competed with 61 teams.

As a result of winning the Facebook Completion, in which they had the most likes, comments and shares on their team photo, each group member received Visa debit cards.

“We want to help Concordia out any way we can, so we’re just going to hand over the grant money and let them use it for the educational enrichment of our students,” Okeke said. “We’re a family over here at Concordia and that grant is for everyone in the Concordia family.”

“I would like to mention that Dr. Mendedo and Dr. Washington were extremely supportive of this undertaking,” Okeke wrote in an email.

She said the team received a lot of support from the community as well.

In addition to the all-expense paid trip to Los Angeles, all competing schools were treated to trip to Disneyland and California Adventure parks.

Although the group did not win the entire competition, they were more than content with their overall performance, which earned them a win against Grambling State University.

“It was all breath taking,” Concordia College quiz bowl team member Jene Matthews said. “People didn’t expect us to win, so we went in as underdogs and came out as champions so to speak.”

Still Employed?: Selma City School Superintendent of Education Gerald Shirley is pictured at a State Board of Education meeting in... read more