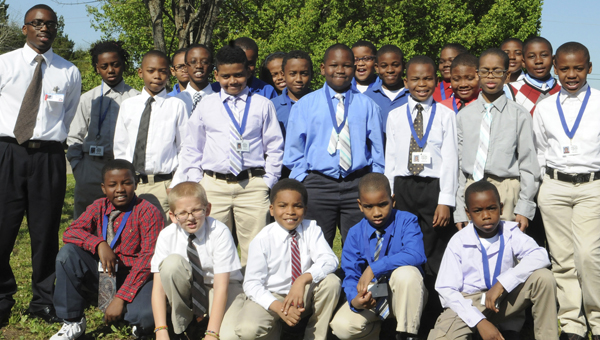 Members of the Cedar Park Elementary’s Esquire Club, right, pose for the camera alongside Michael Strong, who helps mentor the group, outside of their school last Wednesday. Established in November 2013, the club is meant to teach young boys to become respectable men. (Sarah Robinson | Times-Journal)

A local Selma City school is working to help its students with a new mentoring club.

Members of Cedar Park Elementary School’s latest organization, the Esquire Club, have plans to give to back to the community, while learning to better themselves. Established in November by Cedar Park Principal Bertram Pickney, the club is meant to coach young boys to appreciate, love and respect themselves and others.

“Basically, we are trying to help shape and model character. We want to model good conduct in how males are to be respectful and treat females,” Pickney said. “We’re sort of going back to good manners.”

Starting May 9, Esquire Club members will donate their time and effort to community service. The group will visit residents at the Lighthouse Rehab and Healthcare nursing facility and give out gift bags of toiletries.

“What that does is develops humility and also, at the same time, recognizes respect for our elders, which is crucial in any character,” Pickney said.

Esquire Club members are required to wear a dress shirt, ties and slacks Mondays and Fridays to represent the gentlemen-like attitude and actions they are to portray.

“They look to them and think, ‘They look sharp. They look good today,’” Paige said. “The other young men fall in their footsteps trying to get their behavior together.”

Michael Strong, an AmeriCorps representative who helps mentor the club, has faith that Esquire Club can instill life-changing values in its members. Strong, who was in a similar mentoring club at Edgewood Elementary years ago, said the students are showing signs of improvement.

“The benefits are you have more communication skills and you see that leadership. You tend to follow and you get a chance to see how a real man is supposed to act how they are supposed to dress,” Strong said. “The kids are really coming out and catching on to it.”

Esquire Club member Quenton Marshall, a fourth grade student at Cedar Park, said he joined the club to improve himself.

“We want to become young gentlemen,” Marshall said. “We have learned to always be nice, dress up and don’t act up.”

Pickney said everyone must do their part to encourage the youth.

“I think for the salvation of this country it’s imperative that we all embrace every child as own,” Pickney said. “That is our future.”