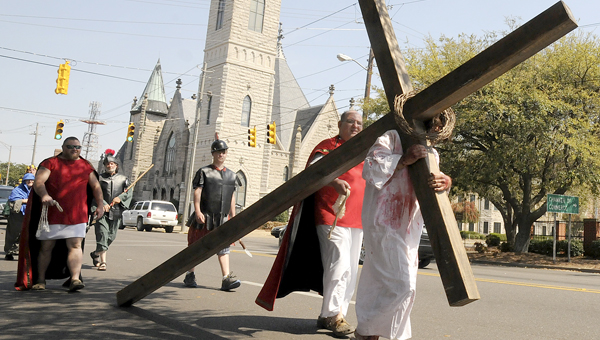 A different path: A process depicting Christ carrying the cross winds its way through Selma’s downtown last year. This year’s procession will have to travel a different route because of bridge construction on Dallas Avenue. (File Photo | Times-Journal)

For more than two decades, a service depicting the crucifixion of Christ followed the same route. Thanks to an ongoing bridge replacement project on Dallas Avenue, those plans had to be changed this year.

“We had hoped the bridge would have been done before, but as soon as they started and announced their expected completion date, we then figured we wouldn’t be able to do things as normal,” Gateway Ministries Baptist Church pastor Robert Walker said. “So, for this one year, we’re having to change things up.”

For 21 years, the church organized a reenactment of the Last Supper and trial of Christ on the Thursday before Easter at Selma City Hall. On the following Friday, the church organized a procession from Selma City Hall to Bloch Park, led by an actor depicting Christ and others portraying Roman soldiers. The procession would end at Bloch Park with Christ being crucified.

“We have seen the power of the event change so many lives,” Walker said. “It really is an amazing and powerful event.”

With the ongoing bridge construction project on Dallas Avenue over Valley Creek, near Bloch Park, the procession Friday will being at Fairview Baptist Church, near Winn Dixie on Dallas Avenue, and proceed to Bloch Park.

The procession is set to begin at 2 p.m. The reenactment of the Last Supper and the trail of Christ will be held Thursday evening at 7 p.m. in front of Selma City Hall.

As for the event itself, it has become a labor of love for the church. In fact, Walker said the church members feel it is their mission to continue this tradition in Selma.

Walker said organizers began planning and practicing — this year — as early as the first of March in weekly meetings. Those meetings become more frequent as the date of the event closes in.

“It has really grown into something special over the first 21 years,” Walker said. “Last year, we had a great turnout and we’re hoping for an even bigger turnout this year.”