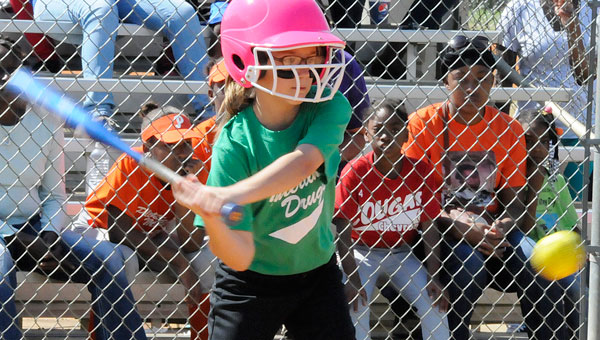 Anna Grace Small bats for Interlink Drugs in a 9 and 10-year-old softball game Saturday against Woodmen of the World at the Dallas County Sportsplex. (Daniel Evans | Times-Journal)

Storms in the early parts of last week caused two nights of youth baseball and softball games to get rained out and forced the crews of the Selma Recreation Department to do a lot of work to get the fields back in playable condition.

Games on Friday, April 11 and Tuesday, April 15 were cancelled due to rain, but since then beautiful weather has left Lebo Jones, the Selma Recreation Department’s baseball and softball director, with only games to worry about.

“Our first week had a lot of rain outs, but we were fortunate to get all of our games in since Monday,” Jones said. “Everything has been great. The crowds have been big and the kids are excited about playing baseball.”

The rainouts forced Jones to shuffle the schedule so that all the games can be played at some point this season.

“We do everything we can to make them up,” Jones said. “Sometimes we will play on a Saturday afternoon and have an afternoon session or we will make them up during the year as we can if there is an empty field or a later time slot we can put them in. We try to make all of them up.”

Jones said the latter part of the first week of the season was perfect, giving teams a chance to really get into the groove of the season.

“This week it has been beautiful,” Jones said. “It is finally baseball weather around here.”

Rain again forced delays and cancellations Monday, forcing Jones and the rest of the department to again shuffle schedules.

Jones said when it comes to this time of year, the weather tends to keep everyone on their toes.