Pastor shares an all too familiar story 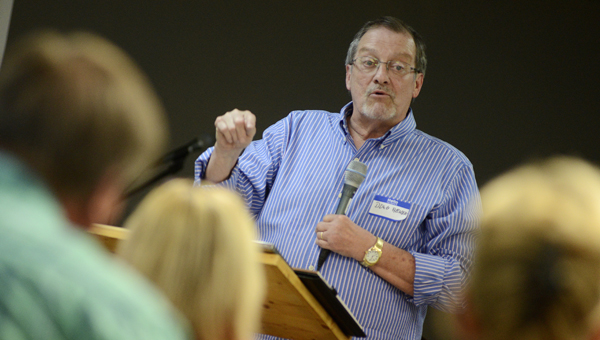 A group of Selma residents assembled Friday evening at Blue Jean Selma to learn how one Kentucky town came together behind local churches to overcome the issues of drug use and violence to save their city from oblivion.

Retired pastor Doug Abner, who lives in Manchester, Ky., spoke to nearly 50 community members about the similarities, not only in the issues that have faced Selma and Manchester, but also about the hope that with the leadership of local churches, Selma can emerge from it’s current struggles.

Abner spoke about Manchester’s history of drug-use and crime, before showing clips of “An Appalachian Dawn,” a documentary about how community members came together to confront both issues.

On May 2, 2004, an estimated 3,500 church and community members in Manchester marched through the town to raise awareness about the rampant drug use that was ruining the lives of many in the community.

Since then, drug use has dramatically decreased and Abner said, other measurements of quality of life have improved in the town once dubbed “Depressed City, USA” by national media.

“God is going to take the bad stuff and he is going to redeemed,” Abner said. “We are seeing this all over America, and it’s happening in Selma.”

Abner said those who want a better future for their communities need to take action.

“We had a saying in Manchester that as bad as the darkness was, the lack of the light was much more of a problem,” “When the good people sit back and do nothing, evil prevails.”

District Judge Bob Armstrong, who attended Friday’s event, said there are plenty of similarities between both the challenges and the end results in Manchester and Selma.

“You can listen to the story and you’ve got poverty, drug abuse, discouragement, homelessness, disunity,” Armstrong said. “It may be different players but it’s the same mess. But the whole point is Selma has already turned the corner, we are coming out. Things like this movie help people realize not only could it happen here, but it is.”

Blue Jean member Shelby High said she believes a transformation similar to what occurred in Manchester is possible in Selma.

“I just wanted to reacquaint people with the idea of what it looks like for us to come together with one heart,”  High said.

Ufomadu shares advice in next book