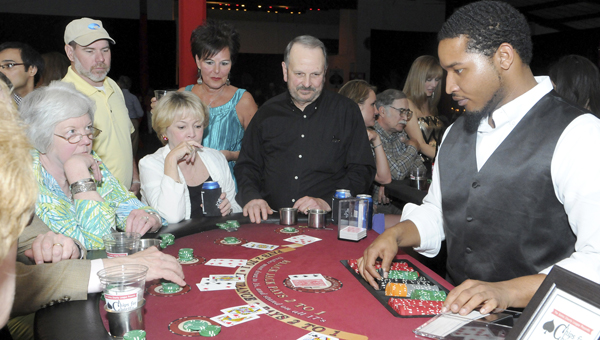 The Selma Charity League has once again organized ‘Chips for Charity,’ which will be held Saturday evening at the Old National Guard Armory. Proceeds from the event will go to support three local charities. — File Photo

The slot machines and craps tables will be back Saturday evening at Selma’s Old National Guard Armory in Selma for the second annual Chips for Charity fundraiser hosted by the Selma Charity League.

Charity League president Mary Susan Crovato said the group is looking to build on the success of last year’s event, which attracted some 300 members of the community.

“Last year, through this one event, we were able to donate $10,000 to the community,” Crovato said. “This year we are expecting to raise more.”

Money raised from this year’s event will be donated to Wannabe Rescued, the Central Alabama Child Advocacy Center and the Selma City School’s homeless program.

Crovato said the anticipation for Saturday’s event — which begins at 7 p.m. —started building even before last year’s had ended.

“During the event last year, people were coming up to me and already asking when it would be taking place again,” Crovato said. “It was very well received by the community, and we are planning to make this an annual event for everyone to take part in. I think people enjoyed it so much last year because it’s just a fun and different way to help out the community.”

Tickets for Chips for Charity are $40 a person. Crovato said ticketholders would receive $1,000 in fake playing money, food and a front row seat to live entertainment.

Crovato said anyone wishing to purchase tickets for the event should contact her at work at 874-8182.