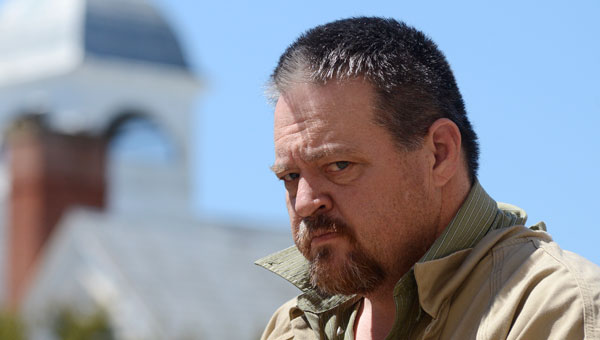 Defendant William R. Best Jr. walks toward the entrance to the Dallas County Courthouse before a bond hearing Thursday afternoon. Best, who is facing charges of second-degree sodomy, second-degree rape and incest, had his bond raised from $250,000 to $2 million during the hearing. (Jay Sowers | Times-Journal)

With the potential of additional charges being levied against him in the near future, the bond for a Valley Grande pastor was raised from $250,000 to $2 million during a bond hearing Thursday at the Dallas County Courthouse.

William R. Best Jr., who had been pastor at Living Waters Worship Center on Deepwoods Drive in Valley Grande, is currently facing charges of second-degree sodomy, second-degree rape and incest.

District Attorney Michael Jackson said his office had been seeking the dramatic increase in Best’s bond because of the nature of the crimes he is accused of as well as the position of trust he held in the community.

“These crimes are very horrible and horrific, and these are the kinds of cases that can really affect the victim,” Jackson said. “It’s just disturbing because this is a pastor doing this. It doesn’t get any worse that that.”

Nine years into his career in the District Attorney’s office, Jackson said this case is one of the more difficult cases he has had to work.

“It’s on the top of the list of terrible crimes,” Jackson said. “There have been further details about this crime, about what he was doing. There could be further charges coming as the investigation continues.”

A preliminary hearing is set to take place on May 20, and the case would go to the Dallas County Grand Jury after that.

For complete coverage of Thursday’s hearing, pick up a copy of Friday’s edition of The Selma Times-Journal.