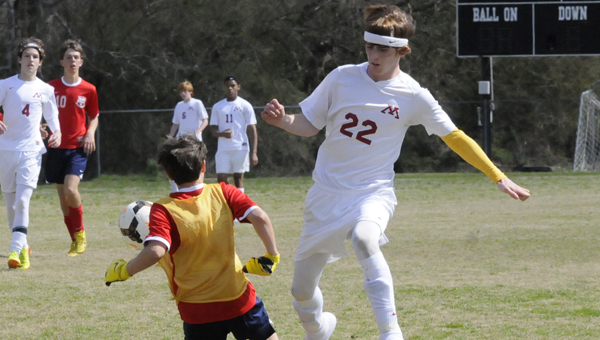 Morgan Academy’s Harrison Watters jumps over a defender in a soccer game earlier this season. Watters and the Senators saw their season come to an end Tuesday night in the ASIA state soccer quarterfinals in a 1-0 loss to Glenwood. Watters was called for a red card in the second half and was disqualified.–Daniel Evans

In two games earlier this year against Glenwood, the Senators lost 8-0 and 5-0, so although Tuesday’s game ended in defeat, Senators head coach Jay Minter said it also showed the growth Morgan’s team made this season.

“The boys have nothing to feel bad about tonight,” Minter said. “They left it all out on the field, and things just didn’t go our way.  Better days are ahead for this young team.”

The teams played in soggy conditions the entire way, after rainstorms that had dropped plenty of water onto the field before the game. Minter said the rain probably neutralized the Senators’ speed advantage.

The only goal of the game came in the first ten minutes, on a high shot that Senators’ goalie Rance Morgan was only able to partially deflect. The Glenwood shot fell into the top, left corner of the net and ended up being the deciding goal in the contest.

Late in the first half, Morgan’s Alston Ivey picked up a yellow card and Diyan Patel was also given a yellow card early in the second half.

Minter changed his formation in the latter portion of the second half, hoping to find some offense to generate a tying goal but it never came together.

A red card was called on Morgan’s Harrison Watters for an aggresive play, putting the Senators at 10 players.

“The call by the referee seemed to be very, very harsh in my opinion,” Minter said. “I saw the play and thought a yellow at worst was appropriate.”

The news got worse for the Senators, as Ivey picked up a second yellow minutes later on a hard challenge at midfield, disqualifying him for the remaining minutes of the game. The absence of two key players left the Senators with only nine players to finish the contest.

Last Friday the teams met at Morgan in the regular season finale for both squads, but the playoff matchup was already set. Macon East won that game 6-4 and then defeated the Senators again Tuesday.

“They had much better technical skill than we did, but our girls just played with a tremendous amount of heart,” Morgan head coach Stephen Rutherford said.

Morgan Academy fell behind 1-0 early after Macon East’s Kelsey Granger scored early, but Morgan’s Kara Wall tied the game up on a corner kick in the first half.

Macon East struck again with twelve minutes to play on a Dallas Sanders strike, giving the Knights a 2-1 advantage.

In all, Macon East had 12 shots on goal in the contest.

After the game, Rutherford told his team how proud he was of their effort all season.

“I told them they had no reason to hold their heads low,” Rutherford said. “They have accomplished so much this year.”

Eagles fall to Billingsley in baseball

Ellwood Christian catcher Rayford Mitchell reacts to a play at home plate in the second inning of Tuesday’s game versus... read more