Sutlers returning for Battle of Selma 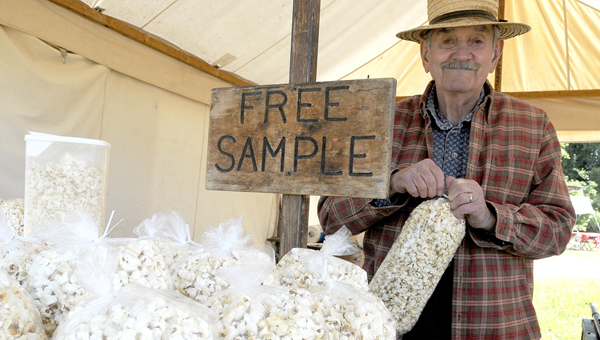 Sutlers are preparing to make their annual return to the area to take part in the Battle of Selma, when they will bring a wide variety of products — including kettle corn — to be offered to those in attendance. –Josh Bergeron

Hundreds of confederate and union soldiers converged on Selma in a historic battle 149 years ago, but just beyond the battlefield sat a band of traveling merchants, ready to service the troops with socks, gloves and perhaps even a bite to eat.

The merchants, colloquially known as sutlers, made a career of following the civil war troops. Some sutlers formerly sold similar products prior to the war.

Every year, during the Battle of Selma, the sutlers return, as a part of the reenactment.

This year’s sutlers are expected to provide many different kinds of products. Gear sold could range from simple accessories, such as gloves and socks, to larger pieces, such as pants and shirts.

During the civil war, Hammonds said the sutlers played a vital role, as soldiers were miles away from home. Receiving clothing from home could take months. And, by the time the gear arrived at its location, the soldiers had likely moved to another battlefield.

Civil war regalia may be easier to obtain in the 21st century, but the reenactors are meticulous about which clothing and accessories they include in outfits, according to Hammonds.

“Grown men, that in everyday life may not care whether they wore a striped shirt or a certain pair of pants, become very attentive to their clothes,” he said. “The same men, that take part in different reenactments, look at the sutlers and decide whether they want to include it in their ensemble.”

Though reenactors use the sutler gear during reenactment, it’s also present at the military ball at Sturdivant Hall, Hammonds added.

The sutlers will open on Friday, April 25 at the battlefield — in Riverview Park, according to the Battle of Selma’s website. The reenactment recreates the historic battle between confederate and union troops, but the website advises not to bring confederate currency for purchases.