Rally remembers the victims of violence 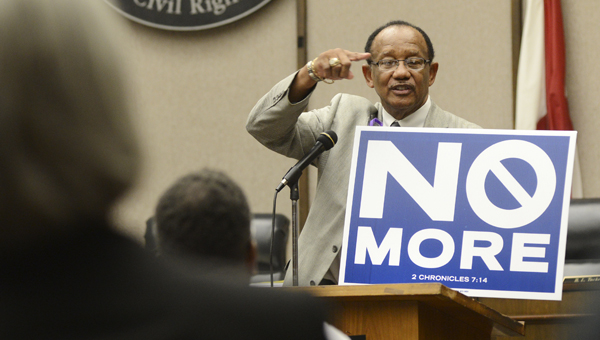 Rain may have forced a change in the location of Friday’s National Murder Awareness Day commemoration in Selma, but it did little to effect the program’s message.

“We want to bring awareness to murder, then maybe it will deter some of the violence,” said Joyce Whitely, an event organizer with Citizens Against Violence / SCOPE. “We wanted to have as many elected officials as we could come out today and offer their support to the victims of violent crimes.”

The event was scheduled to begin a noon in front of Selma’s City Hall, but rain moved the event inside to the Council Chambers.

Friday’s commemoration of National Murder Awareness day was attended by numerous state and local elected officials who offered condolences to those who had been personally affected by murder or other violent crimes.

Jesse Seroy, Deputy Chief Investigator for the State of Alabama, spoke about his experiences working with families of murder victims.

Valley Grande resident Alfred Morrow attended Friday’s event as a way to honor the memory of his son, Demius Jackson, who was murdered on April 17, 2011.

“Everybody’s situation is different, so I can’t speak to what they go through, but not a day goes by that I don’t think about it,” Morrow said. “It means a lot because folks are concerned about violence, not only in Selma, but all over. And we need things like this to bring the community together to see what we can do about it.”

Morrow said he hopes events like Friday’s ceremony could lead to an end to violent crimes in Selma.

“When I was coming up the elevator I was talking to a lady whose daughter was shot and killed,” Morrow said. “And I just hope one day this message will stop the hatred and the hurt caused by murder and violence.”