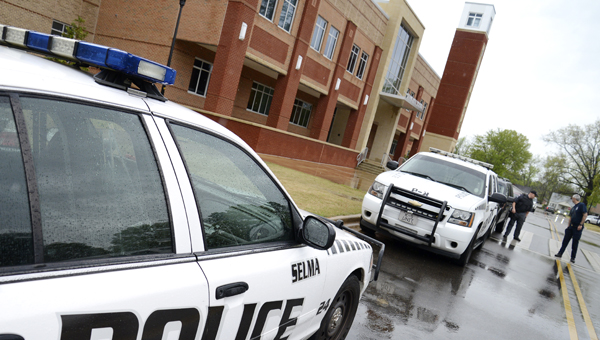 Taking a look around: Members of the Selma Police Department and other law enforcement agencies took part in a planned drug search Friday morning at Selma High School. The school was placed on lockdown while the officers searched several classrooms and inspected cars parked outside of the building. (Jay Sowers | Times-Journal)

A routine search for drugs at Selma High School ended with the best result; no drugs found.

During a planned lockdown of the school, classrooms, lockers and cars were looked over by drug dogs and law enforcement officers.

The search, which had been planned for over a month by a small number of school and law enforcement officials, involved officers and drug dogs from the Selma, Demopolis and Montgomery Police Departments.

“These different departments all work together on things like this, because drug prevention is something all of these departments are concerned with,” said Selma Chief of Police William Riley. “And so we were very pleased that nothing was found.”

Larry DiChiara, acting superintendent of education of Selma City Schools, said the fact that no drugs were found Friday means the seemingly spontaneous searches are accomplishing their goals.

“We aren’t here to catch something, we’re trying to prevent it,” DiChiara said. “If the children know that every once in a while we are going to come through the halls with the dogs, they’ll leave the stuff at home or just not touch it at all.”

DiChiara said Friday’s search had been kept a secret from both staff and students to ensure no one on staff at the school could be accused of targeting certain students.

“You keep it secret until the morning of, and even the principal doesn’t even know it’s going to happen,” DiChiara said. “The reason we do that is because we want to protect the principal and not let people know he is targeting their child.”

While the officers and dogs paced the hallways and classrooms of the school, DiChiara said the building was placed in a soft lockdown; meaning students could not leave the rooms they were in when the search began.

“The dogs can only work so many minutes before they get tired, so what they do is they will search one room and skip the next one or two classrooms,” DiChiara said. “The students will step into the hallway and dogs walk between each desk, sniffing student’s bags and desks, and if they smell anything they will sit right there and stare at the big or deck, and that’s when you would pull the student aside and have them empty the item.”

A measure to ensure one-time raises for employees is causing the Selma City Council to look in new places to... read more