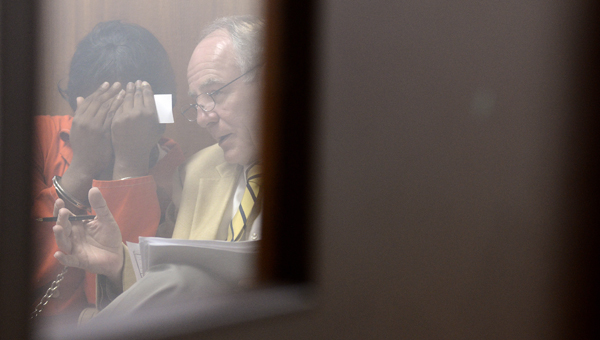 By Sarah Robinson and Jay Sowers

Shanetta Tyus, 23, and Gabriel Fikes, 22, were arrested Wednesday for allegedly burning Tyus’ twins, two of her six children, with an iron.

The couple suggested to investigators that Tyus’ other children used the iron, causing the burns.

“I have never seen anything like that,” Armstrong said in court Thursday, referring to pictures of the twins and the severe burns. “They almost make me sick. I don’t know how you can do it. “

After airlifting the children to UAB and searching Tyus’ home, investigators recovered an iron from the bedroom, where the children were sleeping.

Fikes, who was living with Tyus at the time, testified Thursday he was not in the home during the time of the incident and doesn’t know who burned the children.

Tyus said she was asleep during the incident before the burned children woke her up.

According to statements made by investigators at the hearing, officials with the Department of Human Resources determined Tyus’ other children — the ones she claimed burned the twins — could not possibly have plugged in the iron, leave it on until it got hot, burn the children, unplug it and then clean it.

DHR later reported Tyus as being cooperative and recommended to Armstrong at the children be returned to her, a decision Armstrong strongly regretted during Thursday’s hearing.

“Looking back, I should have never given those kids back to you,” Armstrong said.

After setting the bond at $1 million each, Armstrong also set a preliminary hearing for April 22.

After Thursday’s hearing, Tyus and Fikes were returned to the Dallas County Jail.

Information on the condition of the twins was not made available.