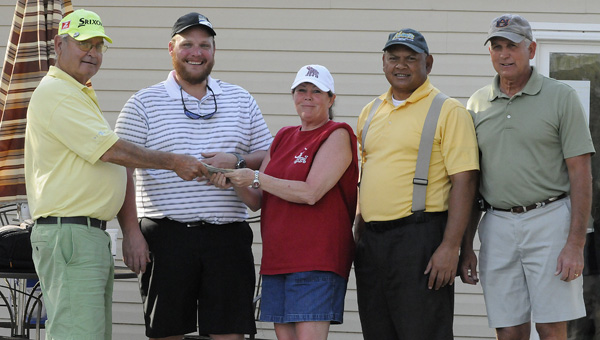 Kyle Reaves, above, of Camden tees off during the 2014 Epsilon Sigma Alpha tournament at Valley Grande Golf Course. Below, the winners of the tournament’s first flight are awarded their prize money by Karen Peacock (middle). The winners of the first flight were (from left to right) Ray Hollinghsead, Roger Stone, Mosses Ngirailab and Steve Smitherman.–Daniel Evans

Local golfers took a day off work and spent time on the links Wednesday, putting and chipping their way around Valley Grande Golf Course while raising money for the Alpha Phi chapter of Epsilon Sigma Alpha sorority.

ESA raised around $2,700 during the tournament, thanks to 43 participants and 31 sponsors that helped make the event possible.

“We send a child to camp every year,” ESA member and tournament co-organizer Kathy Smith said. “We help people with medicine if they can’t afford it. If their house burns down and they can’t afford Christmas, we are like their Earth angels. We get a family for Thanksgiving and for Christmas and try to help them during hardship.”

Karen Peacock, who also helped organize the tournament as a member of ESA, stressed the importance of this tournament and how the money raised allows the sorority to help others.

“This is our major fundraiser that we have every year,” Peacock said. “We really depend on the golfers to come out and our hole sponsors. They do a lot for us. This enables us to help families locally.”

The golf tournament was a four-person team, best ball competition and the scores were broken into two flights. The winners of the first flight were Steve Smitherman, Roger Stone, Ray Hollingshead and Mosses Ngirailab with a  score of 52 (-20).

“We played pretty good to shoot 20-under,” Smitherman, who also manages Valley Grande Golf Course, said. “All the drives were good, all the second shots were good. I think we missed two 4-foot putts or we would have probably shot 22-under.”

Other winners were Steve Spivey, who won the closest to the pin challenge and Stone, who won the longest drive. Ngirailab and Jesse Harris also won an additional putting contest and split the winnings.