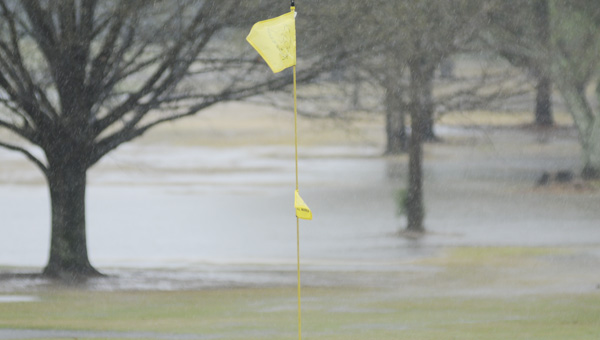 The Selma Country Club was drenched by pouring rain Friday morning, resulting in water soaking the fairways, greens and bunkers. By the afternoon, crews had started preparing the course for Saturday, starting with clearing the water drains and bunkers.–Daniel Evans

The golf course is a popular place for people on vacation, or just in search of a leisurely afternoon with buddies, but behind the scenes there is a never ending battle to keep the grass, bunkers and fairways in pristine condition.

Tommy Burns, PGA professional at the Selma Country Club, and his staff have a checklist of items that they do each week and a set schedule. For instance, the fairways are cut three and half times a week during the summer months and bunkers are raked on certain days, but Burns has been around golf long enough to know it all begins with the greens.

The greens are cut seven days a week and verticut — a process which removes excess thatch as blades dig 1/8” into the soil — once a week.

The greens are also top dressed once a week, which helps smooth the putting surface while also helping keeping thatch under control which results in the growth of grass shoots and stems.

But the greens are only the beginning.

Like all of the grass on the course, the fairways are cut different directions each week to keep the grass growth under control.

“If you go the same direction every week, the grass will grow that direction,” Burns said. “Water will tend to send grass growing in one direction and the sun tends to because we are working with an east, west sun here. Everything tends to go towards the Alabama River.”

The course uses specific herbicides and  insecticides to keep grass and insects under control.

“You have to try to keep this grass off guard,” Burns said. “It will try to outsmart you.”

Burns said tees are usually second on his priority list followed by the fairways, bunkers and the rough.

But, when it rains as it did Friday, the typical, every day checklist gives way to a different order of priorities.

First, Burns said he checks the drains, which are often covered in leaves from the courses’ large oak and cedar trees while also picking up limbs and checking the status of the trees.

If the wind is hard enough and rain follows, Burns said a tree could be lost.

While drainage is always an issue for any golf course when Mother Nature brings along a downpour, Burns said bunkers are the biggest problem area after a rainstorm.

“When you get 2.5 inches in 12 hours, you tend to lose probably 80 percent of it with run off. But the problem with runoff is it creates new problems for me,” Burns said. “I have to redo the bunkers. In other words, I have to shovel the sand back on the bank and re-rake them and redistribute the sand.”

Of course, the main goal is to try to get the golf course back into playing shape, Burns said.

“We can get the golf course back open in six hours,” Burns said. “I’m pretty comfortable in the winter with six hours. In the summer, it’s two hours. We drain very well.”

Burns credits the Alabama River and the way Selma and its surroundings have developed geographically throughout time as the reason the course is so sandy, which is one of the reasons it is able to dry and drain so fast.

During a tournament week Burns said course preparation goes on all week. The bunkers are raked every day and the greens and fairways are cut daily to try to get the course in perfect condition going into the tournament.

“We do change it during tournaments. Generally we cut every day and we roll the greens three days a week, but prior to the tournament I cut and roll every day,” Burns said. “We mow fairways every day, starting seven days prior to an event. We rake the bunkers every day trying to get them ready for the tournament.”