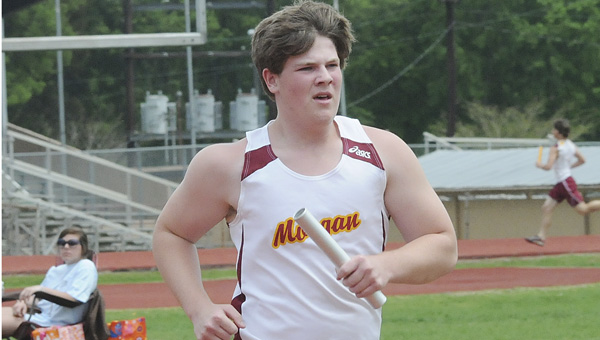 A Morgan Academy student athlete runs in the 2013 AISA state track and field championships at Memorial Stadium. The Senators are getting ready for this year’s event, which will take place April 16-17 at Memorial Stadium and will include around 25 teams.–File Photo

With the Alabama Independent Schools Association state track meet getting closer every day, the Morgan Academy Senators are starting to gear up in their chase for a state championship.

The Senators have already held two track and field events at Memorial Stadium this year and will hold another April 7. The AISA state meet will also be held there April 16-17.

Morgan Academy track coach Rob Robinson said the first two track and field events the Senators hosted at Memorial Stadium were “experiments” as teams tried to figure out what events their athletes excelled in so that they could place them into the right spots for the state meet.

“Everyone is just trying to get people qualified and trying people at different events and by the third track meet you have a little bit of an idea of what you are going to do in the state meet,” Robinson said.

In AISA, the state track meet is about the same size as a normal track event, because only a few schools have a place to hold a meet.  Therefore, Morgan has already faced off against many of the state’s top teams.

Robinson said one of the first things he noticed during the Senators’ two meets was that Lee-Scott, the defending boys and girls state champions, haven’t dropped off at all.

“They are head over heels above everyone else,” Robinson said of Lee-Scott.

The Senators’ girls finished second out of 17 teams in their first track meet of the year and tied for third in their second track meet out of 21 teams.

While the Morgan boys team has not had as much success, Robinson also sees the team’s growth despite fighting for time with other Senators’ sports.

“The boys [team has] improved from last year,” Robinson said. “We are still low on numbers. We have to compete with other sports and so forth and it is hard to get everyone there at the same time.”

Now, both teams are starting to eye the state championship event.

“Well, we would like to win it all but it is going to be tough to knock Lee-Scott off,” Robinson said.

Even if the Senators don’t win it all, Robinson said he mainly wants to see his team stick with some of the state’s best.

“We’ve got some really good athletes out there and we just want to hang with them,” Robinson said.