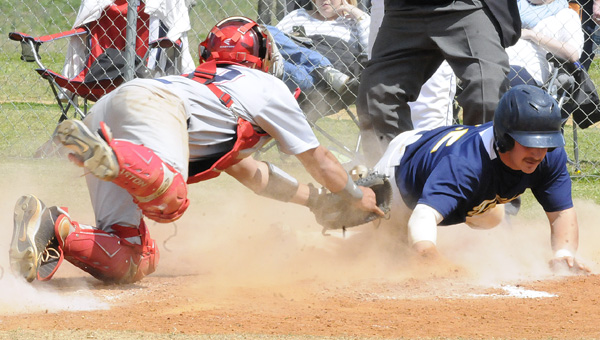 In its weekend series opener against the defending National Junior College Athletic Association national champions, Wallace Community College Selma came up on the losing end of a 12-2 romp.

The Patriots (13-20, 2-8) fell behind early against Central Alabama Community College (15-13, 8-2) and couldn’t find consistent offense against the Trojans pitching, who started a dominant Shaun Smirnoff.

“When you get into these conference games, the pitching is tough. They were the national champions last year,” WCCS head coach Frank Elliot said.

“It wasn’t a fluke that they won the World Series. They’ve got a good team. We faced them in the fall and we saw their pitching then and we know on Saturday it is going to be two guys throwing it Saturday.”

Elliot said he didn’t want to use all of his pitching in the first game of the series, especially with two other games ahead on Saturday.

“Going into this game, we were going to hold back some pitching,” Elliot said. “If we had a chance to win it we were going to put in our better pitcher’s at the end. If the thing got out of hand a little bit, I didn’t want to run anymore arms out there.”

After three innings, the Patriots found themselves in a big hole.

The Trojans took a 1-0 lead after the second inning but really got their bats going into the top of the third.

With CACC up 2-0, A.J. Reynolds doubled to left field to add two more runs to give the Trojans a 4-0 advantage after two and a half innings.

Wallace starting pitcher Toby King was pulled after three innings for Stephen Mims, who struggled right away. Mims allowed a single to Ryan Raspiro to begin the inning, followed by a double by Kyler Deese that allowed Raspiro to score.

After Mims’ walked Alex Lee, Jalin Lawson doubled down the line to give the Trojans a 7-0 advantage. Eventually, Mims settled into the game, forcing Zach Mayhew to strike out and getting Nick Gribbs to ground out to end the inning.

The Patriots’ offense showed signs of life in the bottom of the fourth, with a single by Josh Gonzalez scoring Tyler Graham. Wallace might have added more but Gonzalez got caught in a rundown and was thrown out at second to end the inning.

While the Patriots’ struggled to get runners into scoring position, the Trojans kept consistently making contact and adding runs.

Griggs singled in the bottom of the sixth and Raspino doubled to make it a 11-1 CAAC, as the Trojans started pulling away for their 15th win in 19 games.

Wallace added its only other run on a single by Reise Bell that scored Bryce Jay. in the seventh inning. CACC took a ten-run lead in the eighth when Alex Lee doubled on a grounder that took a weird hop over the head of Wallace first basemen Tyler Evans, scoring Ryan Smith. The game was called after the eighth because the Trojans led by ten runs.

Smirnoff (5-1) pitched six innings for the Trojans and is now tied for the Alabama Community College Conference lead in wins.

The teams will be play two more games at WCCS Saturday at 12 p.m. and will play another game at Alexander City April 1 at 3 p.m.