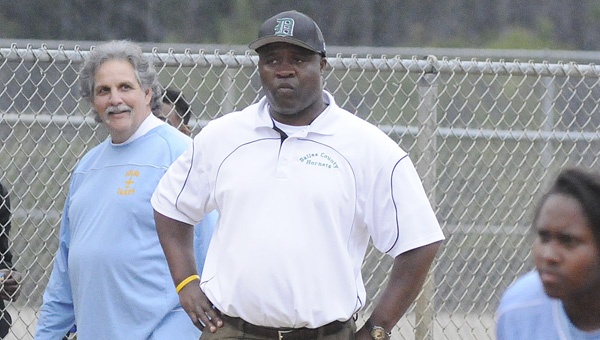 Dallas County head coach Willie Moore looks on from third base as his Hornets battled Selma in a game earlier this season. The Hornets have started their season with 16 consecutive road contests and will play their first home game against Selma April 1 at 4 p.m.–Daniel Evans

The Lady Hornets have played all of their games on the road this season, including tournaments at Verbena and Maplesville. Head coach Willie Moore said he know his team is probably ready to play a home game and he is too.

Part of the reason Moore front loaded the Hornets’ schedule with road games is because the softball field at Dallas County High School doesn’t have lights.

Moore said later in the year there will be more daylight, which will allow the Hornets more time to complete varsity and junior varsity home games in one day.

“Our field doesn’t have lights so by the time we try to play two games, darkness will have fallen on us so that’s why we try to play a lot of road games the first month of the season and then play at home the latter part because we have more daylight,” Moore said.

If Dallas County attempted to play home games at this point of the season, Moore said many of the junior varsity games would have to be cut short.

It hasn’t exactly been a normal beginning of the season for Moore or the Hornets.  Moore coached the Hornets’ basketball team to the state championship in March, which forced him to miss the first softball practices of the year.

Although he didn’t think it would be an issue because of his team’s experience, Moore said it did put the Hornets behind the eight ball a little bit.

“It’s been hectic for me,” Moore said. “Going into it, having the senior class that we had coming back this year, I didn’t think it would affect us that much but obviously it did.”

The main area of concern for Moore is his team’s inability to find consistency at the plate, which he said is likely a result of his limited time with the team and their 16 away games that have prevented them from doing hitting drills before games.

“We’ve got several experienced players that need to make more plays for us and we can do a better job of hitting the softball,” Moore said. “We have too many strikeouts in our lineup right now.”

However, Moore isn’t displeased with his team’s overall record at this point, especially with 13 of their final 17 games at home.

“With more practice time the second half of the season, we are going to get a lot better,” Moore said.

The Hornets have had to play several freshman this season, and Moore said some of them are probably not completely ready for the grind of a varsity softball season.

Overall, he is pleased with how his young players have performed.

“Depending on the game, some of the freshman we’ve had are hot and cold,” Moore said.

Dallas County will likely need all hands on deck as the Hornets wrap up their regular season in April. This week is an off week due to Spring break, but next week the Hornets will start a schedule that includes games nearly every day in April.

Dallas County will play its first home game of the season April 1 against Selma and will play six games in eight days.  Altogether the Hornets have 17 scheduled games in the month of April in a 29 day stretch.