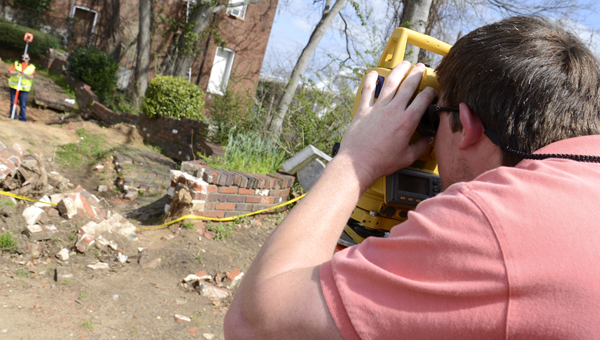 Selma city consultants are nearing a solution for a collapsed sewer line beneath Bienville Park.

The bidding process for repairs to the sewage pipeline under Bienville Park is almost complete. Engineering consultant Ray Hogg is expected to present solutions at the April 8 city council meeting, according to Mayor George Evans.

The Selma City Council voted unanimously to repair the sewer pipeline using $32,000 from the half-cent sales tax fund at a February city council meeting. The number is an estimate, according to Evans. Actual bid amounts could vary.

As of now, the project is in the design stage, which Hogg said he expected to be completed by Friday.

Hogg engineering conducted a survey, which he said said would give the city a better understanding of the contractors they need to hire to make the appropriate repairs.

“We’ve got to design it then give the drawing and specifications and bid documents to potential bidders to bid,” Hogg said.

Councilman Michael Johnson said the city’s current budget wouldn’t allow for the city to repair the entire pipeline along Lauderdale Street. A seperate sinkhole has developed near the intersection of Lauderdale Street and Alabama Avenue.

“What we are not able to do right now is the remainder of it going down Lauderdale Street,” Johnson said. “We are going to have to get that when we get some more funding.”

While the official construction date has not been set, Johnson said he would like the selected contractor to start working on the problem as soon as possible.

“This really needs to be fixed, because of dangers,” Johnson said. “Somebody can actually get hurt.”

While the process is not a quick one, Johnson said he is more concerned about the quality of the work.

“Let’s do it right in that park,” Johnson said. “That way that park can last 15 to 20 to 30 years before we have to do that problem occur again.”