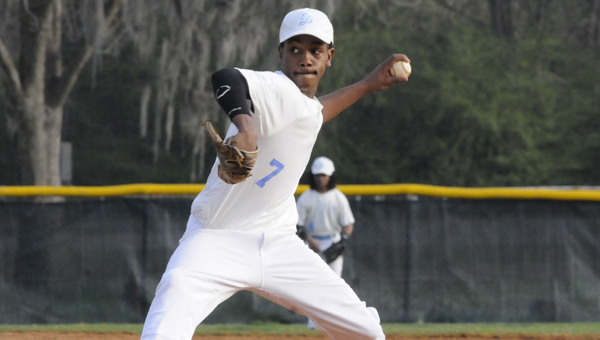 Selma appeared to be on its way to a big victory in its area opener, but Demopolis rallied with a seven run sixth inning to steal away a 7-4 win.

Behind the pitching of Keyshawn Ford and some key hits, the Saints took a 3-0 lead into the sixth inning and appeared to have complete control of the game. Demopolis rallied, using a double by Tyler Oates to jumpstart a huge run to grab the lead and to add some insurance runs.

“We had a walk and a couple of bad plays in that sixth inning that cost us,” Selma head coach Burrell Bonner said. “My guys dropped their heads and they let them score too many runs in that inning.”

The teams will play a double header Saturday at Demopolis High School, so this was the first of a weekend three-game series.

Following a slow start, the Tigers really got their offense cranked up in the sixth.

After Oates walked, Ford walked Michael Brooks to put two runners on base with no outs. J.A. Morrison bunted and when Selma’s Adam Bruno was unable to cover first base fast enough, the Tigers had the bases loaded. Ford’s next pitch was low and it rolled to the backstop, resulting in a passed ball that allowed Oates to score.

Jacob Rodrigues doubled to score Brooks and Morrison to tie the game 3-3. The next two batters, Stephen Stewart and Ernest Dunn, laid down bunts for hits. Both of the balls slowly dribbled Ford’s way, but he mishandled them and was unable to make the play at first. Dunn’s bunt scored a run to give Demopolis a 4-3 lead.

“I think he got a little tired because he wasn’t finishing,” Burrell said of Ford. “He was still releasing the ball high. He kind of lost his target a little bit and then when he gained control of it, they started hitting him. I think what got him was when he booted those two bunts and he kind of lost focus there.”

Demopolis piled it on from that point, as Ryan Schroader singled to give the Tigers a 5-3 lead. Burrell pulled Ford at that point, replacing him with Eddie Thigpen on the pitching mound. Demopolis kept hacking away, as Seth Aiken hit a grounder down the third base line that got past Selma’s third basemen Aaron Drake and rolled into left field.

Matt Eicher scored on that play, giving the Tigers a 6-3 advantage.

Demopolis added one more run on an off target throw by Selma’s Davian Brantley that went into the Saints’ dugout When Schroader struck out, the inning finally came to an end, but Burrell said it came after too many runs crossed the plate.

“We should have been out of the inning. Out of all of that, they got maybe one hit in the inning,” Burrell said. “We lost our momentum. They picked up a little momentum on those errors and came out with the victory.”

The Saints were unable to score in the bottom of the sixth, but did add a run in the seventh when Ford grounded out to score Curon Ellis.

Early on, it was all Saints.

Ford was dominant at the plate, keeping Demopolis off the scoreboard and only allowed a handful of Tigers to reach base.

A sacrifice fly by Marquell Moorer gave the Saints a 1-0 lead in the second inning. Selma added to its lead in the third when Brantley singled to score Eddie Thigpen to give Selma 2-0 lead. In the fifth inning, Drake’s sacrifice scored Brantley to give the Saints a 3-0 lead, but it was all Demopolis from there.

Morgan Academy pitcher Margaret Mims delivers a pitch to a Fort Dale batter in the Senators’ 5-0 win over the... read more