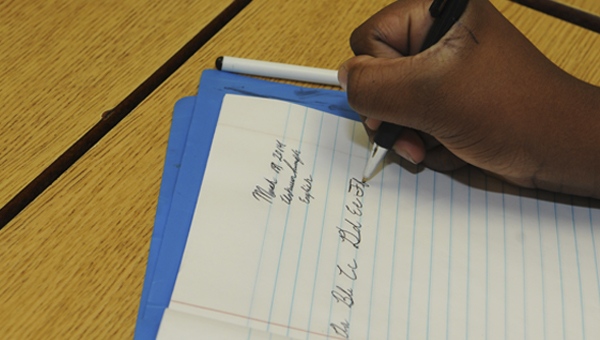 Created around the 15th century, cursive writing was developed and popularized before Alfred Fairbans’ Handwriting Manual, containing the italic form of writing, contributed to the education of most of the western world in 1932, according to Britannica’s website.

Many centuries later, the Alabama Department of Education, still includes cursive in its content standards for second and third grade.

Selma City School instructors that teach upper level elementary grades differ in their decision on whether to make their students practice cursive handwriting.

“I think everyone should have the option to write in cursive or print,” said Shayla Williams, a fifth grade teacher at Edgewood Elementary School. “At least give them the exposure to the skill of writing in cursive and not just introduce them to print only.”

Whether it’s the way the pen glides across the paper, the appearance of the strokes, or executing a signature, students in Williams class collectively agreed that cursive writing is enjoyable.

For Chandra Toney, a sixth grade English teacher at School of Discovery, cursive writing is not a must for her students.

“It’s a skill that should be taught, but basically more so in the lower grades,” Toney said. “So when they get in the upper grades, if it’s required by any teacher, they’ll still be able to do it.”

Toney offered some insight into why some teachers of the lower grade levels aren’t willing to teach cursive.

“They probably feel that it’s time-consuming to try to teach them to learn to write in print, so a lot of them don’t want to accept that challenge of now I need to show them to write in cursive,” Toney said.

There are no plans to phase out cursive writing for Alabama schools, according to the Alabama Department of Education, as the current course of study is effective until the next revision in the 2016-2017 academic year.