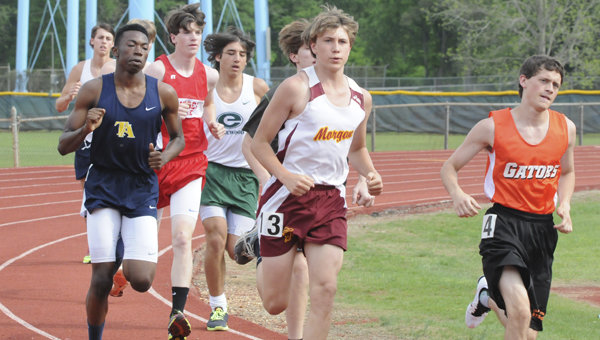 Although the two state track meets it will host are over a month away, preparation work began Wednesday on the running surface at Selma’s Memorial Stadium.

A crew was repairing several problem areas with the track Wednesday, which included fixing unlevel parts of the running surface.

“The heavy duty work started today,” Selma Parks and Recreation Director Elton Reece said. “What we did today is we are having a track repair company come in. I’ve got four spots that need to be resurfaced and reworked so they will do that [over the next two days].”

The Hornets’ track competition will take place on April 15, the day before the AISA state championship.

The AISA state competition is not very large and the recreation department has already dealt with several similarly sized meets this year, including two of Morgan Academy’s track meets.

The larger meet is the AHSAA competition, which brings in 194 schools from Class 1A-Class 3A.

“We will sit down and have a meeting with the AHSAA within the next week or ten days to make sure there is not any changes and notify them that we have done what we promised them to do,” Reece said.

Reece said many schools book hotels a year before the competition, just so they can make sure they have rooms in Selma. Reece said the hotel revenue, along with the flood of visitors, is the reward the city gets for hosting.

“Basically what the city gets back out of it is it fills every hotel room we’ve got,” Reece said. “It’s that and the residuals from gas, shopping and eating.”

Selma High School will be the host school for the AHSAA meet and is responsible for the concession stands and the hospitality room, Reece said.

Although a lot of preparation happens at the stadium, a lot goes on outside it as well.

Last year, several local restuarants ran out of food due to the volume of traffic they received from the track championships.

Sheryl Smedley, executive director of the Selma and Dallas County Chamber of Commerce, said plans are in place to meet with Mayor George Evans and local businesses in the next few weeks to discuss the traffic expected from the 2014 track championships.

This year marks the third year of a three-year contract the city signed with the AHSAA to host the track championship.

Selma University’s baseball team is on fire, winning nine straight games and soaring to the top of the USCAA standings... read more