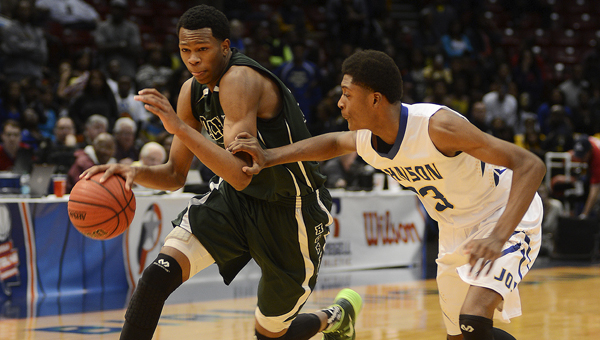 Dallas County forward William Lee led the Hornets to their first ever state basketball championship and is the Times-Journal’s 2013-2014 boys’ high school basketball player of the year. Lee, averaged 20 points and 13 rebounds this season for the Hornets.–Daniel Evans

After leading his team to a Class 4A state championship, Dallas County’s William Lee is the Times-Journal’s boys basketball county player of the year.

In the 4A championship game against J.O. Johnson, Lee hit a three-pointer at the end of regulation to tie the game and then hit three free throws in overtime to clinch Dallas County’s first basketball championship.

“It still hasn’t hit me,” Lee said of his team’s championship. “It might hit me sometime soon but we still can’t believe it, but we will believe it one day.”

Lee began the year with three goals in mind: Win a state championship, win Class 4A Player of the Year, and win Mr. Basketball — which is given to the state’s best player. He made the all-state Class 4A first team and won the Class 4A Player of the Year last season and is considered one of the favorites to win that award again this season. Lee said after the Hornets’ come-from-behind championship win that he feels like he deserves Mr. Basketball and will win the award, but that won’t be announced until April.

Dallas County head coach Willie Moore has said all season that Lee is the best player in the state, but through his four years of coaching Lee he saw the big man evolve into the team’s leader.

“I saw him come in as a little boy really unsure about a lot of things,” Moore said. “He blossomed into a wonderful, charismatic young man that people had an opportunity to see during his senior year.”

Moore said during the last few weeks of the playoffs, he found himself watching Lee more in practice and getting sentimental knowing that any game could be the last time he coached him.

The 6’9” forward signed with UAB before the season started and prepares for his career with the Blazers. He owns the national shot block record with 26 in a game during the 2011-2012 season.

Lee averaged 20 points per game and 13 rebounds this season.

Lee’s Dallas County teammate, Jerrod Moorer also makes the Times-Journal’s all-county team. Moorer , a junior, made eight three-pointers in a game this season against Childersburg and averaged 16 points and 6.5 rebounds this season.

Lee missed seven games this season and in his absence, Moore credits Moorer for picking up the scoring load for the Hornets.

Keith senior Anfernee Simmons led the Bears to the Class 1A Central Regional tournament at Alabama State, while averaging 17 points and five rebounds per game this season.