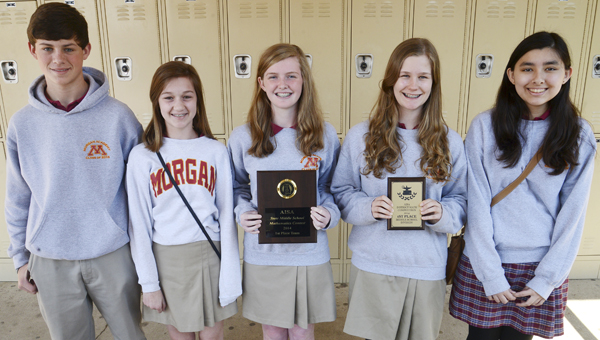 Months of preparation added up to a victory in the Alabama Independent School Association State Middle School Mathematics Competition in late February for five students from Morgan Academy.

After winning one of the seven AISA district competitions on Feb. 11, the team competition in the State Competition on Feb. 28 at Faulkner University in Montgomery.

During the championship round, each member of the team completed a 50-question test and the team’s best four scores were tallied together. Scheer scored the highest score out of all competitors.

“We got the copy of the test after and discussed what they missed and what they didn’t miss,” Glover said. “But we didn’t know we had won first place until it was announced later, and we ended up finding out we were the only school that had all five students answer 40 or more questions correctly. I was probably more excited than they were.”

The test included questions dealing with scientific notation, probability, distance along with basic equations and percentages, topics Glover said the students had prepared for over the months leading up to the competition.

“I knew I had a good group and I knew we had a chance to do well in the competitions, so we started working through problems the first week of December,” Glover said. “I estimated we worked over 600 math problems to get everybody ready. We started getting together and working through those hundreds and hundreds of problems so each one of the kids would feel comfortable with whatever they were presented with during the competitions.

Chappelle, who was a first-year math team member, said the months of preparation prepared him well for the test.

“There really isn’t a favorite type of problem for me, I guess I just like them all,” Chappelle said. “But working through so many problems leading up to the test was tough.”

Glover said she was proud with how the students were able to do whatever it took to find the answers to the problems on the tests.

“These kids can go a different route to find the answer,” Glover said. “There were a few times when Austin would find the answer to a problem but I would have almost no idea how he got it. They are really good math students because they can do that, they can really think outside of the box.”