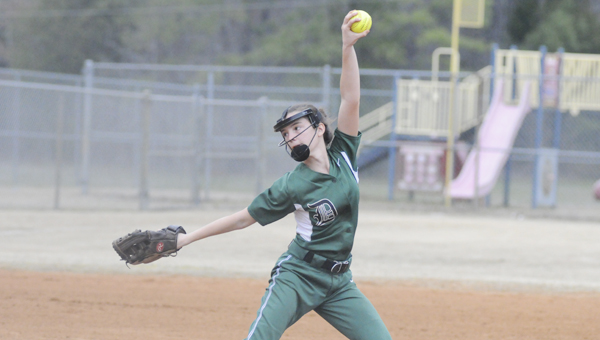 Dallas County pitcher Tori Hatfield winds up for a pitch in the Hornets’ 16-1 victory over Selma Tuesday night at the Dallas County Sportsplex. –Daniel Evans

Dallas County’s Lady Hornets (4-3) used a grand slam from Amy Persinger and a seven-run third inning to roll past Selma (1-4) in softball 16-1 Tuesday at the Dallas County Sportsplex.

The Hornets (4-3) scored a total of five runs in the first inning and led 11-1 after three innings to pull away for a win over their county rivals.

“After the first inning we were a little shaky, but the grand slam to start the game off was pretty big,” Dallas County head coach Willie Moore said.

“That gave us a little cushion and we were able to play a lot of players.”

Moore, who has had to play catch-up with softball season after coaching the Hornets’ boys’ basketball team to a state championship, said he expects his team to get better as the season continues.

“I’ve not had a single practice with my team at all,” Moore said. “We have to get better defensively. We are not as good defensively as we were last year. We have a lot of players returning off of last year’s team so I expected us to be a little bit better but with practice time we are going to get a lot better defensively.”

Selma head coach Mark Fedor said his team needs to do a better job at the plate.

“We just didn’t hit the ball so I’ve got to take them back down and work on their hitting,” Fedor said. “We swung at a lot of high balls we shouldn’t have been swinging at.”

Selma answered when a pop fly fell in the bottom of the second, putting runners on second and third. Selma called for a double steal, sending both runners and confusing the Hornets infield, which ultimately resulted in both runners advancing and the Saints scoring their lone run of the contest.

Dallas County continued to be aggressive at the plate, adding a run in the second inning on a ball that got past Selma’s catcher, and seven additional runs in a huge third.

In the third, Lindsey McIllwain doubled to score two runs and Brittney White singled to add another run. With rain starting to fall, Green doubled to right field and scored Persinger to make the score 11-1.Dallas County tacked on two more runs in the inning and led 13-1.

The Hornets scored three times in the bottom of the fifth to add to their huge advantage, while Selma was unable to get anything going at the plate.