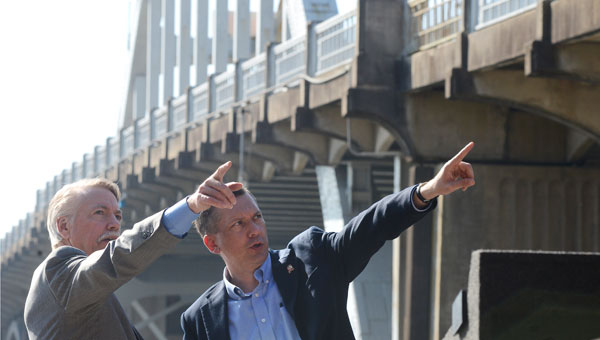 A day after thousands of marchers crossed the Edmund Pettus Bridge in remembrance of Bloody Sunday, the bridge was added to the National Parks Service’s list of national historic landmarks.

Jonathan Jarvis, Director of the National Parks Service, was on hand for Monday’s ceremony at Songs of Selma Park and said the bridge’s symbolic role in the civil rights movement of the 1960’s made the structure more than deserving of the honor.

“Before March 7, 1965 this was just a bridge. It was just a little known crossing of the Alabama River and that changed forever in 1965,” Jarvis said. “The violence of Bloody Sunday did not stop the marchers from their ultimate destination. In fact it sped the country toward one of the most important pieces of civil rights laws passed in the U.S. Congress, the Voting Rights Act.”

Jarvis said the bridge would join the other 2,450 national historic landmarks that serve as reminders of crucial moments in American history.

“For every milestone in American history, there is a place; a place where a decision was made, and idea born, a line drawn or a barrier broken,” Jarvis said. “Those places are sacred ground. They remind us not only of where we have been, but also where we aspire to go. They remind us of our greatest achievements, our greatest mistakes, but mostly, of our ideals that we strive to uphold as a nation.”

John Cooper, Director of the Alabama Department of Transportation, said the bridge’s honor would help remind a new generation of unthinkable challenges overcome by the civil rights marchers in the 1960’s.

“We all honor history, we all read history, we all study history, but it’s much more difficult to know when you are living history,” Cooper said. “But in this place, at a time about 49 years ago, a lot of people lived a lot of history. In some ways you can say it’s terribly unfortunate that they needed to live that history, but it was terribly monumental that people did it.”

Congresswoman Terri Sewell (D-Selma) said the formal recognition might have come later than some would have hoped, but it didn’t mean the bridge had been forgotten.

The ceremony concluded with the unveiling of a plaque, detailing the bridge’s role in the Bloody Sunday event. The plaque will be one of two that will be displayed at either end of the bridge on frames that were assembled late last year.