Bloody Sunday is more than just a calendar date 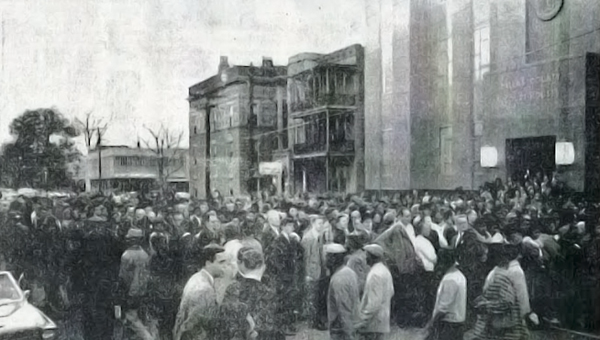 Civil Rights: This picture from the March 16 edition of the Selma Times-Journal shows protesters gathered outside of the Dallas County Courthouse during the civil rights movement of the 1960s. (File Photo | Times-Journal)

On Sunday, thousands will trek to Selma to participate in a celebration that marks the beginning of Selma’s civil rights legacy.

Many of us are aware of how Bloody Sunday unfolded. Approximately 600 civil rights marchers, bound for Montgomery, marched over the Edmund Pettus Bridge to find scores of law enforcement waiting on the other side. U.S. Rep. John Lewis, D-Ga., helped lead the first march. At the time he represented the Student Nonviolent Coordinating Committee. As Lewis and other organizers crossed the bridge, law enforcement ordered the demonstrators to disband and go home. The marchers tried to speak to the officers, but, in a disgusting show of force, officers beat demonstrators with night sticks, fired tear gas and charged into the crowd on horseback.

Days after the event, an editorial in the Times-Journal stated: “After two days of attempting to analyze the almost unbelievable events of Sunday afternoon, we are still confounded by the action resorted to by law enforcement officers on the scene. There appears to be no logical reasoning behind the display of force employed by state troopers and members of the mounted  units who participated in dispersing the demonstrators.”

Almost exactly 49 years later, I’m still at a loss for words when trying to discern why law enforcement attacked and beat protesters.

Luckily, protesters were persistent in their goal — get to Montgomery.

They marched through chilling rain and slept in muddy fields in an effort to ensure their voices were heard at the polls.

It’s undeniable the marches played a vital role in the passage of the 1965 Voting Rights Act. In 1960, there were slightly more than 50,000 registered African American voters in Alabama. Three decades later, the same number was ten times greater — more than 500,000.

Ensuring every American is guaranteed basic human rights was an important feat, but equally impressive were the thousands in the Black Belt who organized for a cause and achieved the goal, despite overwhelming odds.

As we walk across the Edmund Pettus Bridge, with thousands of others, remember the difference Selma made in the most important civil rights battle in America’s history. It’s a shining example of what Selma and the Black Belt can do when fighting for a common cause.

Perhaps Selma should learn a lesson from its past. Rather than bickering over small meaningless issues, we should focus efforts on the larger, more prevalent problems, like povery and injustice that remains in our society.

Our city is far from perfect. Like every other municipality in the nation, many issues need to be addressed, but by taking a glimpse at our past, we can ensure our future is prosperous. All it takes is a little cooperation.

Dr. Avis Williams: Spring is in the air