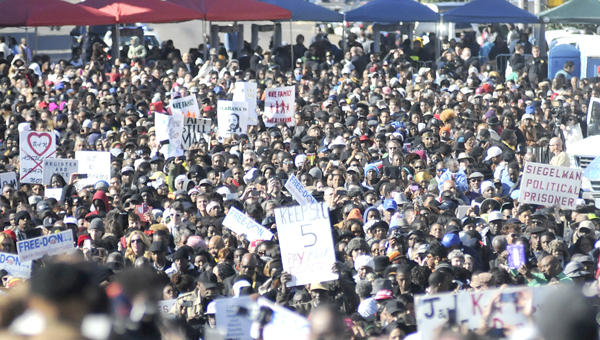 Expecting a full house: The annual Bridge Crossing Jubilee begins Thursday and will include more than 40 events. The annual celebration culminates Sunday afternoon with the bridge crossing re-enactment that traditionally attracts 10s of thousands each year. (File Photo | Times-Journal)

Several famous individuals are expected to participate in what many consider to be Selma’s most anticipated event.

Hosted by the National Voting Rights Museum & Institute, the annual Bridge Crossing Jubilee will feature more than 40 events from March 6 through March 10 meant to commemorate Bloody Sunday, the attempted Selma-to-Montgomery march that was brutally disrupted by law enforcement officials on March 7, 1965

“There is no event, I don’t think, in America that is as intense culturally that combines cultural and history as what goes on in Selma,” founder and event coordinator Faya Rose Toure Sanders said.

Jackson, NAACP board member William Barber, Service Employees International Union Secretary-Treasurer Eliseo Medina and others will speak at the pre-march rally for the Bridge Crossing Re-enactment meant to honor Bloody Sunday and the Selma-to-Montgomery march. The pre-march rally will begin at Brown Chapel A.M.E. Church from Sunday from 1:30 p.m. to 2:30 p.m.

For $50 per person, participants will have the opportunity to watch a Freedom Flame Awards show with a musical performance from Holiday.

The awards show is held at the Carl C. Morgan Convention center Saturday from 7:30 p.m. to 10 p.m., followed by the bridge crossing re-enactment Sunday at 2:30 p.m.

Rapper Young Dro, Peggy Scott-Adams, Holiday and others will perform at the Jubilee Festival conducted at the foot of the Edmund Pettus Bridge Saturday from 11 a.m. to 7 p.m.

Sanders said they are able to get so much support from celebrities, because the celebration focuses on so a meaningful part of history.

For more information and a schedule of events, call 526-2626, visit www.selmajubilee.com or visit www.somovement.net.

Jase Robertson, star of A&E’s Duck Dynasty, spoke extensively about the importance of faith and family during the praise and... read more