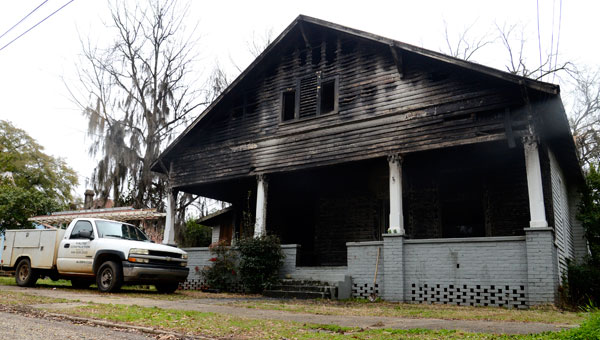 This home, located on Furniss Avenue, was consumed by fire early Monday morning. The two apartments were destroyed, but no one was injured. (Jay Sowers | Times-Journal)

By midday Monday, the Selma Fire Department has responded to 59 fires so far this year, a sharp increase from the 37 they had battled at this point last year.

Fire Chief Michael Stokes said cold weather and forgetfulness on the part of some residents has been two of the causes for the increase in calls.

“We’ve had an increase in fires so far this year and some of that can be traced to people leaving a space heater or stove-top unattended,” Stokes said. “Which is sad, I mean in both cases, people should just turn the heater or stove off if they have to leave the room.”

Stokes said two fires the department has battled in the past are prime examples of the high costs of house fires.

Six occupied apartments were destroyed at an apartment complex located at 1003 1st Ave. late Friday evening, and two more families were displaced after a fire tore through two apartments in a house located at 412 Furniss Ave. shortly before 6 a.m. Monday.

In both cases, members of the fire department were on the scene within three minutes. More important, Stokes added, there were no injuries sustained in either incident.

Stokes said the causes of the 1st Avenue and Furniss Avenue fires are currently unknown as investigations into the cause of both are ongoing.

“Preliminary reports are telling us the Furniss Avenue fire was electrical, and the 1st Avenue fire is being investigated by the State Fire Marshal and I haven’t heard back from them yet,” Stokes said. “But we really want to make people aware of the need to be careful at all times, whether they are using a stove, heater, or any electrical item. It’s sad to see this many fires that could have been prevented.”