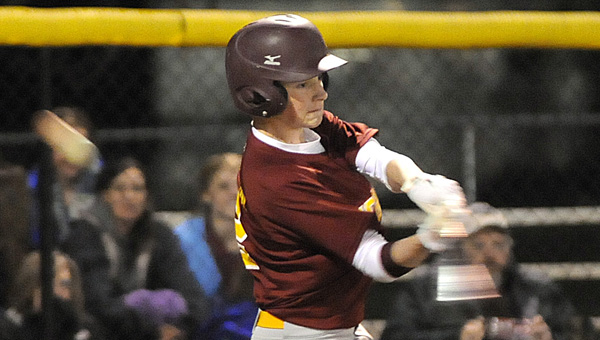 Morgan Academy’s Jackson Henderson swings and misses at a pitch from Wilcox Academy’s Drake Lauderdale. The Senators’ struck out 15 times in their loss to the Wildcats, giving Morgan two losses in the first day of the Morgan Pepsi Baseball Classic.–Daniel Evans

Morgan Academy could not find an answer for Wilcox Academy pitcher Drake Lauderdale, resulting in a 3-0 loss Friday night in the Senators’ second game of the Morgan Pepsi Baseball Classic.

The Senators struck out 15 times in the game and in the few instances when Morgan did get runners into scoring position the team was unable to capitalize.

“Our bats just went cold,” Morgan head coach Jeremy Carter said. “We just didn’t do what we were supposed to do. Their pitcher was good and he kept us off stride.”

Outside of his team’s bats, Carter was pretty pleased with his team’s performance. Morgan cut down on errors after an earlier 7-1 loss to Pike and it allowed the Senators to stay in the game despite not being able to get runners on base.

“Besides batting, we did everything well,” Carter said. “We are getting better. This is our sixth game so we still have a little way to go but we are on the right track.”

While the Senators couldn’t get anything going at the plate, Wilcox started off hot. With Drew Brasell singled to score a run in the first inning, and a second Wildcats’ runner was thrown out at home when trying to add to the lead.

From that point on, each pitcher settled in and got into a groove. Neither team seriously threatened again until the fifth inning, where Wilcox was able to add an additional run on a bunt that scored Drake Lauderdale to make the score 2-0.

The Senators managed to get runners in scoring position in the bottom of the sixth. Morgan’s Woodham Keemer walked to begin the inning and Alex Davis reached base on a dropped pop fly by the Wildcats’ right fielder.

Wilcox put an end to the rally in a hurry. Lauderdale, who pitched all seven innings, got out of the jam by forcing J. R. Wood to ground into a fielder’s choice and struck out Coleman Smith to end the inning.

In the top of the seventh inning, Wilcox added an additional insurance run when Powe was unable to catch a ball in right field, setting up a sac fly opportunity for the Wildcats to make the score 3-0. The Senators threatned to score in the seventh, but Wilcox ended the game on a ground out by Powe.

Morgan Academy will play tomorrow at 8 a.m. against Conerstone Acaademy and at 10 a.m. versus Sumter Academy.